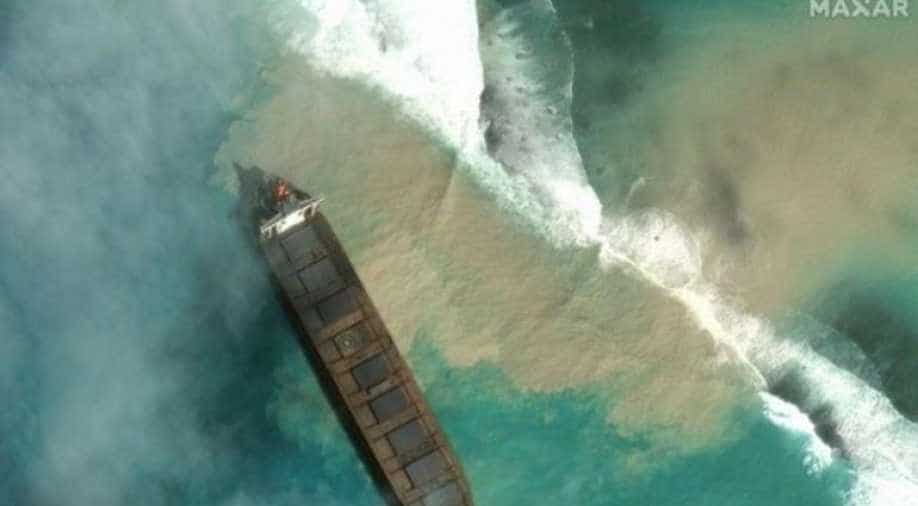 President Emmanuel Macron on Saturday said expert teams and specialised equipment were being deployed from nearby Reunion, a French island in the Indian Ocean, to assist with the crisis.

France on Saturday dispatched a naval vessel and military aircraft from Reunion to Mauritius, where desperate efforts are underway to contain an oil spill polluting the archipelago's iconic reefs and protected ecosystems.

Rough seas have thwarted efforts to stop fuel leaking from the cargo vessel MV Wakashio, which ran aground two weeks ago and is staining pristine waters in an ecologically-protected marine area off the southeast coast.

Attempts to stabilise the bulk carrier and pump 4,000 tonnes of fuel from the hold have failed, prompting Prime Minister Pravind Jugnauth to declare "a state of environmental emergency" as oil seeped unabated from a crack in the hull.

Volunteers have marshalled along the shores where dark pools of oil now coat the coral reefs, lagoons and white-sand beaches upon which Mauritius has built its reputation as a green tourism destination.

Jugnauth asked France for urgent assistance to mitigate what Mauritian authorities are calling an unprecedented environmental disaster beyond the scope of the tiny Indian Ocean nation.

President Emmanuel Macron on Saturday said expert teams and specialised equipment were being deployed from nearby Reunion, a French island in the Indian Ocean, to assist with the crisis.

"When biodiversity is at risk, there is an urgent need for action. France is there. At the side of the Mauritian people," Macron posted on Twitter.

The French navy ship Le Champlain sailed for Mauritius on Saturday while a military aircraft was scheduled to make two rotations over the spill site, both equipped with specialist pollution control equipment and experts aboard.

The tanker, belonging to a Japanese company but Panamanian-flagged, was carrying 3,800 tonnes of fuel and 200 tonnes of diesel when it struck a reef at Pointe d'Esny, an ecological jewel famed for internationally-listed conservation sites, turquoise waters and protected wetlands.

The environment ministry announced this week that oil had begun seeping from the hull, confirming the worst.

Aerial images show the enormous scale of the damage, with huge stretches of azure seas around the marooned ship stained a deep inky black.