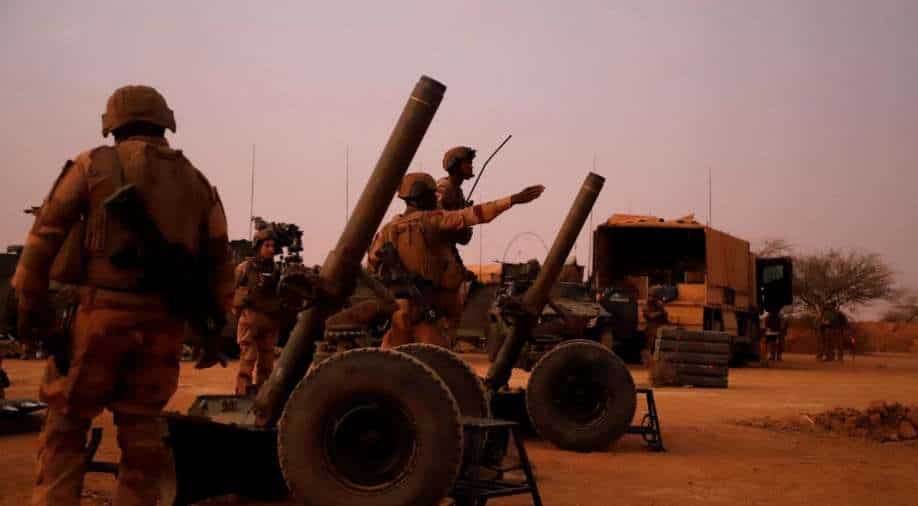 The operation, carried out near the border with Niger, took weeks of preparation involving air force and ground army units, the defence ministry in Paris said.  Photograph:( Reuters )

French troops in Mali have captured a senior member of the Sahel affiliate of the Islamic State group, the French military said Wednesday.

The arrest comes as France prepares to complete its withdrawal from Mali after almost a decade battling a jihadist insurgency in the country with the French-led Barkhane anti-insurgency force.

"In the night of June 11-12, an operation of the Barkhane force allowed the capture of Oumeya Ould Albakaye, a senior figure in the Islamic State in the Greater Sahara (IS-GS)," a spokesman for the chief of staff told AFP.

The operation, carried out near the border with Niger, took weeks of preparation involving air force and ground army units, the defence ministry in Paris said.

Albakaye will be held by French forces for questioning for several days and then handed to the Malian authorities, the military added.

A security source who asked not to be named told AFP that Albakaye had once been seen as a potential successor to former IS-GS leader Adnan Abu Walid al-Sahrawi, who was killed by French forces in August 2021.

An explosives expert, Albakaye was a regional chief in the group, commanding the areas of Gourma in Mali and Oudalan in neighbouring Burkina Faso.

He is responsible for a large number of abuses against civilians in those countries, the military said.

France is to complete its withdrawal from Mali within the next few months when its main military base at Gao will be returned to Malian forces.

On Wednesday the French defence ministry called the capture of Albakaye "another success for the Barkhane force, which is pursuing its fight against armed terrorist groups while re-positioning itself outside Mali".

Relations between Mali and France plummeted after the military seized power in Bamako in August 2020.

The junta has resisted setting an early date to restore civilian rule and tightened ties with Moscow, bringing in "military instructors" that France and its allies condemn as mercenaries hired from the pro-Kremlin Wagner group.

For most of the previous decade, France had been Mali's staunchest ally in its fight against jihadists who have claimed thousands of lives and driven hundreds of thousands from their homes.

France began its anti-jihadist operations in the Sahel in 2013, helping Mali, its former colony, to snuff out a revolt in the north.

But the jihadists regrouped to attack the volatile centre of the country, initiating a full insurgency that elected president Ibrahim Boubacar Keita was unable to break.

In August 2020, protests against Keita culminated in a coup by disgruntled colonels a move followed by a second military takeover in May 2021.

Relations with France kept deteriorating, propelled by the junta's resistance to setting an early date to restore civilian rule and by Bamako's charges that France was inciting the region to take a hard line against it.

In January this year, the French ambassador to Bamako was expelled and the following month France announced the pullout of its troops from Mali, and those of the French-led Takuba force which comprises nearly 1,000 soldiers drawn mostly from EU countries.

An unknown is the impact of the turmoil on the United Nations' peacekeeping force in Mali (MINUSMA), which with 14,000 troops and police is one of the biggest UN operations in the world.