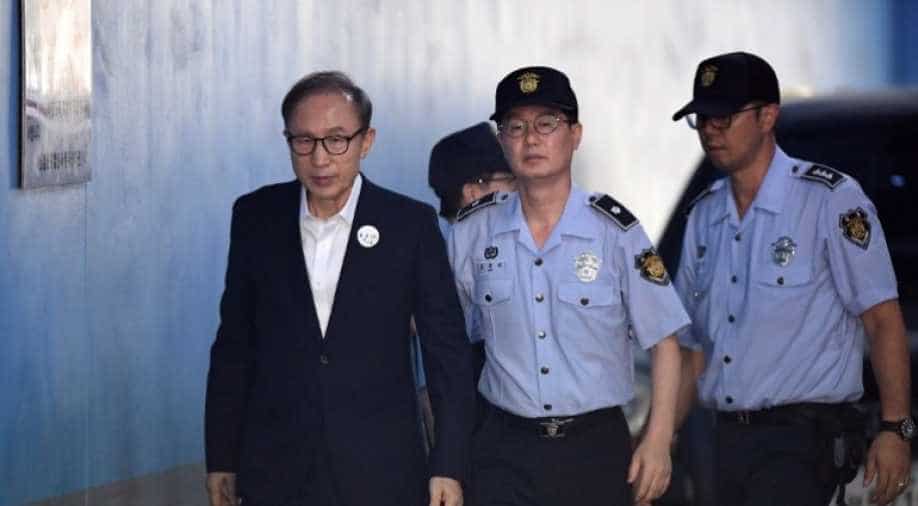 The Seoul High Court has now approved Lee's bail petition made on January 29 on grounds of his deteriorating health, among other reasons.

A former president of South Korea, sentenced to 15 years of imprisonment for corruption, was released on bail on Wednesday, the Yonhap news agency had reported.

In October last year, the Central District Court in Seoul had found Lee Myung-bak, who served as president between 2008 and 2013, guilty of bribery and embezzlement, among other charges, and had sentenced him to 15 years in jail and a fine of 13 billion won ($11.5 million).

Lee, 77, who has been in prison since March 22 last year, had appealed the decision.

The Seoul High Court has now approved Lee's bail petition made on January 29 on grounds of his deteriorating health, among other reasons.

The court set 1 billion won ($886,130) as the bail amount and ordered him to stay only at his registered residence and limit his contacts to his immediate family members and legal representatives, conditions that Lee accepted.

The former president will also need judicial approval for his visits to the hospital and will have to present a record of his daily activities.

In October, the Central District Court had ruled that there was evidence that Lee was the de facto owner of auto parts manufacturer DAS, which is headed by his brother and has been the focus of several of the charges against him.

It found him guilty of abusing his presidential powers to embezzle funds for personal and political gains.

A three-judge bench had ruled that misappropriation of 24 billion won was proved in court, while also finding Lee guilty of accepting $5.85 million from Samsung to pardon the prison term faced by the conglomerate's head, Lee Kun-hee, for tax fraud.

Lee claims his trial is a case of political retaliation by the government, led by current president Moon Jae-in, who was a close friend of the late president and Lee's predecessor Roh Moo-hyun, who committed suicide in 2009 while under investigation for corruption.

Lee became the fourth former president of the country to be sentenced to prison, after Chun Doo-hwan, who was the leader of the last military junta until 1987, Roh Tae-woo and Park Geun-hye.

Park is serving a 25-year sentence for corruption following her conviction last year.