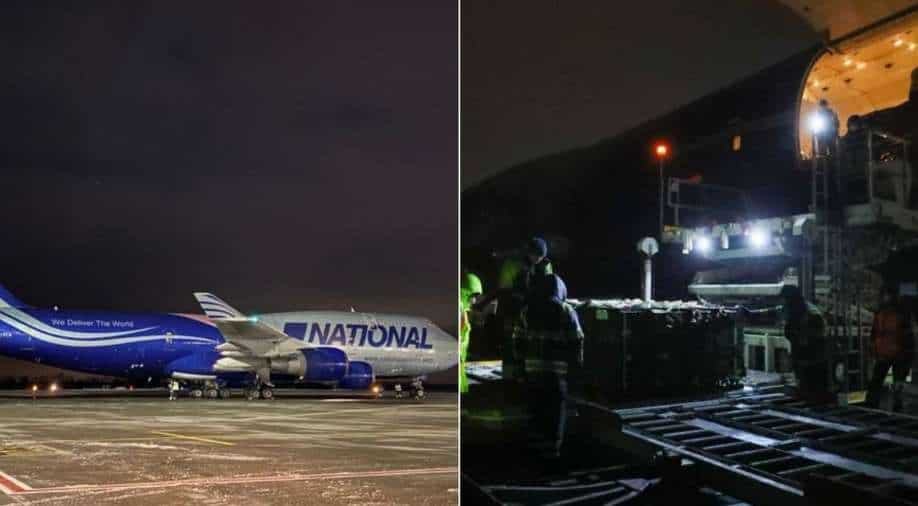 The US approved the $200 million package in December. (Image credit @USEmbassyKyiv). Photograph:( Twitter )

The shipment demonstrates US commitment to helping Ukraine bolster its defences in the "face of growing Russian aggression", said the US Embassy

As tensions continue to rise between Russia and Ukraine, the first shipment of assistance sent by the United States to Ukraine arrived in Kyiv, the US Embassy informed on Saturday (January 22).

The first shipment of a $200 million security support package includes aid such as ammunition for the front line defenders of Ukraine.

The shipment — and $2.7 billion since 2014 — demonstrates US commitment to helping Ukraine bolster its defences in the "face of growing Russian aggression", said the US Embassy in Kyiv tweeted.

ALSO READ | Russia's 'checkmate': Why the Orion combat drone is a gamechanger

The first shipment of assistance recently directed by President Biden to Ukraine arrived in Ukraine tonight. This shipment includes close to
200,000 pounds of lethal aid, including ammunition for the front line defenders of Ukraine. [1/2] pic.twitter.com/YeYanK0Px6

The aid comes amid the Western countries, including the US are trying to de-escalate the tensions after Russia has massed tens of thousands of troops on its borders with Ukraine.

The aid has arrived in Ukraine after US Secretary of State Antony Blinken visited Kyiv this week. In reply, Ukraine’s defence minister thanked the United States for the aid.

Germany will not supply weapons to Kyiv

Meanwhile, German Defence Minister Christine Lambrecht has said that Berlin will not deliver arms to Ukraine in the standoff with Russia for now. She said it in an interview published on Saturday, a few days after Britain started supplying Kyiv with anti-tank weapons.

"I can understand the wish to support Ukraine, and that's exactly what we are doing already," Lambrecht told the Welt am Sonntag weekly.

"We have to do everything to de-escalate. Currently, arms deliveries would not be helpful in this respect, there is agreement on this in the German government," Lambrecht said.