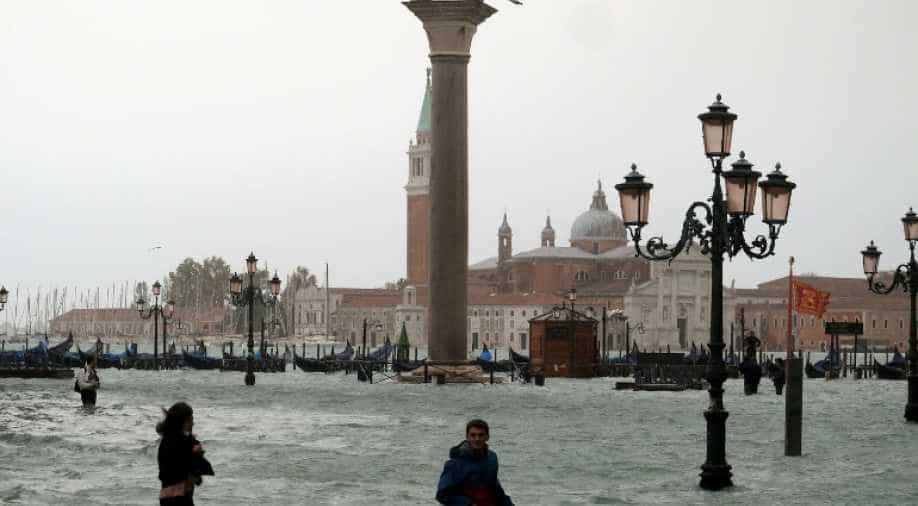 Several towns in the province of Belluno were cut off after a landslide damaged a mountain road and repair efforts were hampered by the insistent heavy rains.

Fierce winds and rains have killed at least 20 people in Italy this week and razed thousands of hectares of forest in the country's devastated north, officials said.

An 87-year-old woman and a 62-year-old German tourist were killed Friday after being struck by lightning in Sardinia.

It brings to 20 the number of people killed by bad weather in Italy since the start of the week, according to the country's civil protection agency, with meteorologists predicting further wind and rain throughout the weekend.

Trees covering the mountainsides in the Dolomites range were reduced to matchsticks, flattened by winds that tore through the Veneto region on Thursday.

"It's like after an earthquake," Veneto governor Luca Zaia said. "Thousands of hectares of forest were razed to the ground, as if by a giant electric saw." In addition, 160,000 people in the region were left without electricity, Zaia said, adding that parts of the Dolomites were "reduced to looking like the surface of the moon".

"We've been brought to our knees," the politician said.

The storms in northern Italy on Thursday killed two pensioners aged 74 and 73 when a tree fell on their car in the Aosta Valley. Another person fell into a river in the Brescia region and was dragged under by the current.

In the Alto Adige region, an 81-year-old died after falling off the damaged roof of his Alpine cottage, while a 53-year-old whose car was hit by a falling tree during bad weather died on Monday.

Several towns in the province of Belluno were cut off after a landslide damaged a mountain road and repair efforts were hampered by the insistent heavy rains.

Floods in Sicily have closed many roads and mayors ordered schools, public parks, and underpasses shut.

The picturesque fishing village of Portofino near Genoa, a famed holiday resort on the Italian riviera, was only reachable by sea after the main road collapsed and an emergency path opened to let residents out was deemed too dangerous.

"It won't be easy or quick but we count on returning Portofino next summer to the millions of tourists who come to visit it," regional governor Giovanni Toti said.

The Genoa region alone had suffered tens of millions of euros' worth of damage -- a price tag that could rise to hundreds of millions in the long term, he added.

Italy's civil protection agency described the weather lashing Italy this week as "one of the most complex meteorological situations of the past 50 to 60 years".

Venice was inundated by near-record flooding on Monday, ferocious storms drove high winds reaching up to 180 kilometres (110 miles) an hour, and hundreds of trees were torn up by their roots in the Italian capital.