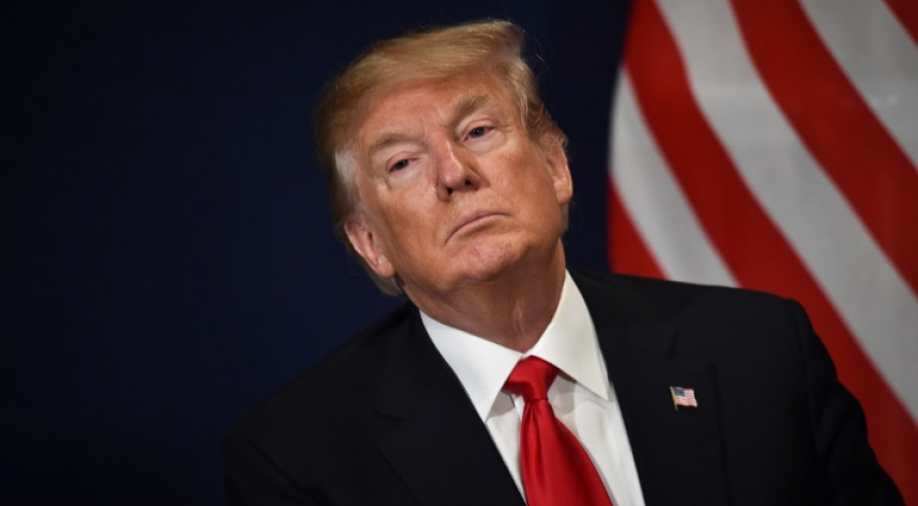 The memo, written by Republicans, alleges the probe into possible collusion between the Trump presidential campaign and Russia was driven by bias against Trump in the FBI and Justice Department. Photograph:(AFP)
Follow Us

President Donald Trump and his Republican allies in Congress on Friday escalated a campaign against US law enforcement agencies over their probe of Trump's ties to Russia, releasing a disputed memo that the FBI warned was misleading and inaccurate.

The previously classified document, written by Republicans on the House of Representatives intelligence committee, alleges that the federal probe of potential collusion between Trump's 2016 presidential campaign and Russia was a product of political bias against Trump at the FBI and Justice Department.

Ignoring a plea from the Federal Bureau of Investigation, Trump approved the release of the memo without redactions, deepening an extraordinary breach between the president and senior law enforcement officials over a probe that has dogged him during his first year in office.

Democrats said the four-page memo mischaracterises highly sensitive classified information and was intended to undermine Special Counsel Robert Mueller's criminal probe into the Russia matter launched in May 2017 that grew out of an earlier FBI investigation. They warned Trump against using it as a pretext to fire Deputy Attorney General Rod Rosenstein, who hired Mueller and oversees the investigation, or Mueller himself.

Asked by reporters whether the memo made him more likely to fire Rosenstein or whether he had confidence in him, Trump replied, "You figure that one out." Dismissing Rosenstein would likely ignite a political firestorm, much as his firing of FBI chief James Comey did last year.

Hours after Trump spoke, a White House official said there have been no discussions or considerations about firing Rosenstein.

Mueller also is examining whether Trump has committed obstruction of justice in trying to thwart the Russia probe.

The memo alleges that the FBI concealed the Democratic ties of a source the agency used to justify surveillance on a former Trump campaign advisor with ties to Russia. The memo listed a string of senior Justice Department officials including Rosenstein who it said signed off on this.

"I think it's a disgrace what's happening in our country," Trump told reporters when asked about the memo, adding that "a lot of people should be ashamed of themselves."

Some lawmakers accused Trump of playing into the hands of Russian President Vladimir Putin after, as Republican Senator John McCain put it, Russia "engaged in an elaborate plot to interfere in an American election and undermine our democracy."

"If we continue to undermine our own rule of law, we are doing Putin's job for him," McCain, who is being treated for brain cancer, said in a statement.

Mueller's probe has led to guilty pleas by two of his foreign policy advisers to charges of lying to the FBI, and indictments of former campaign manager Paul Manafort and Manafort's business partner Rick Gates.

Trump has called the investigation a "witch hunt," denying any collusion with Russia or obstruction of justice. Moscow has denied any election meddling.

In a swipe at US law enforcement leaders on Twitter hours before the memo's release, Trump said, "The top Leadership and Investigators of the FBI and the Justice Department have politicized the sacred investigative process in favour of Democrats and against Republicans - something which would have been unthinkable just a short time ago."

It was his latest attack on top law enforcement officials. Trump fired Comey last May as the FBI pursued the Russia probe, leading to Mueller's appointment by Rosenstein.

The FBI on Wednesday had expressed "grave concerns about material omissions of fact" in the document and urged that it not be made public. Writing on Twitter, Comey branded the memo "dishonest and misleading."

FBI Director Christopher Wray sent a message to bureau employees apparently aimed at boosting morale after the memo's release. "I stand by our shared determination to do our work independently and by the book," Wray said in the message, excerpts of which were seen by Reuters.

The memo was commissioned by the Republican chairman of the House intelligence panel, Devin Nunes. It focused on court-approved surveillance of former Trump campaign aide Carter Page and said the FBI used a source who was strongly biased against Trump - former British spy Christopher Steele - to justify the action.

It alleged that a dossier of alleged Trump-Russia contacts compiled by Steele, and funded in part by US Democrats, formed an "essential part" of requests to a special court to be allowed to conduct electronic surveillance on Page that began in October 2016.

It said the initial application and subsequent renewal applications, signed off on by various senior Justice Department officials, did not mention the link between Steele and the Democrats. It also portrayed Steele as "passionate" about Trump not becoming president.

Despite the memo's charges, neither the focus on Page nor the FBI's investigation of Trump-Russia ties began with the Steele dossier.

Page appeared on the FBI's radar screen as early as 2013, when he met in New York with Russians who were officers of the Kremlin's foreign intelligence service, sources have said.

The memo acknowledges that the FBI counterintelligence investigation began in July 2016 - three months before the request for electronic surveillance on Page - as a result of the activities of another Trump campaign aide, George Papadopoulos.

Papadopoulos told an Australian diplomat in May 2016 that Russia had political dirt on Democratic presidential candidate Hillary Clinton, information Australian officials passed to the US government, the New York Times reported in December.

The entire file that the Justice Department used to apply for permission to eavesdrop on Page remains highly classified, making it hard to evaluate the memo's contents.

"The selective release and politicization of classified information sets a terrible precedent and will do long-term damage to the Intelligence Community and our law enforcement agencies," House intelligence committee Democrats said in a statement.

They said they hoped the panel would vote on Monday to release their own memo responding to the allegations.

US Attorney General Jeff Sessions, who has recused himself from the Russia investigation, indicated he planned to refer the memo's allegations to the Justice Department's inspector general for investigation.

A White House official said Trump had always been inclined to release the Republican memo, despite the FBI's urging that he not do so, and he relied heavily on Chief of Staff John Kelly and White House Counsel Don McGahn in approving the release.