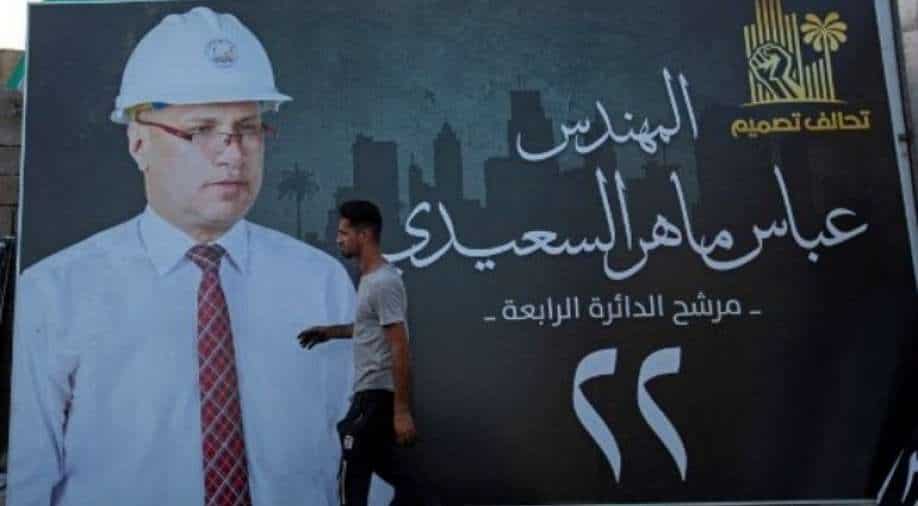 A worker walks by a campaign banner at a workshop in Iraq's southern port city of Basra on September 12, 2021, ahead of the upcoming parliamentary elections. Photograph:( AFP )

Bringing forward the elections was one of the only concessions made by the government in the face of mass demonstrations that broke out in late 2019 against endemic corruption and administrative breakdown.

"I strongly encourage everyone to make sure this is a peaceful process," von Cramon told reporters in Baghdad, adding that "violence and intimidation have no place in elections".

Bringing forward the elections was one of the only concessions made by the government in the face of mass demonstrations that broke out in late 2019 against endemic corruption and administrative breakdown.

Dozens of demonstrators have been kidnapped, murdered or targeted in attacks over the past two years.

Although nobody has claimed responsibility for the violence, activists blame Shiite militias, a rising force often funded by Iran.

Ahead of the polls, "any violence will only interfere and would finally prevent voters casting their votes," said von Cramon, herself a member of the European Parliament for Germany's Greens party.

Authorities must "ensure that all candidates, and particularly female candidates, political activists, journalists, human rights defenders and the electorate can fully exercise their democratic rights and freedoms," she added.

Nevertheless, calls to boycott the ballot box have grown in recent months, especially from disillusioned young Iraqis who accuse the parties of intimidation on top of vote-buying and cronyism.

Almost 25 million people are on the electoral roll for the October 10 vote to pick 329 MPs.

Human Rights Watch said that there were "significant obstacles" to Iraq's hundreds of thousands of disabled people voting "due to discriminatory legislation and inaccessible polling places".

Most polling stations are in school buildings without easy access for less mobile people, it highlighted.