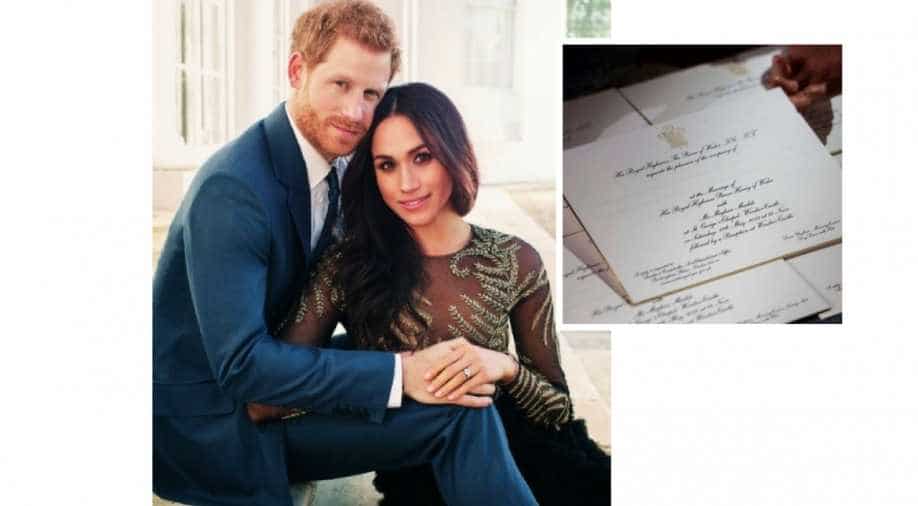 The much-awaited royal wedding of Prince Harry and his fiance Meghan Markle is barely a couple months away and we have news that the couple's wedding card is not only ready but has also been dispatched to 600 lucky guests, with a select 200 close friends invited to an after-party at Frogmore House. Also Read: Priyanka Chopra is 'happy' for friend Meghan Markle as she gets engaged to Prince Harry

Confirming the same, the Kensington Palace said that the formal invitations have been sent by the Prince of Wales, for the May 19 service at St George's Chapel, Windsor (The couple get married on May 19 as revealed by the Palace twitter account earlier). In pictures: Prince Harry, Meghan Markle release official engagement photoshoot

The invitations follow many years of Royal tradition and have been made by @BarnardWestwood. They feature the Three-Feathered Badge of the Prince of Wales printed in gold ink. pic.twitter.com/cd7LBmRJxO

Invitations to the wedding of Prince Harry and Ms. Meghan Markle have been issued in the name of His Royal Highness The Prince of Wales. pic.twitter.com/jidwuYboon

The beautiful card was produced by Barnard and Westwood, which has held the "Royal Warrant for Printing & Bookbinding by Appointment to Her Majesty The Queen" since 1985 and has a second royal warrant with the Prince of Wales. Also Read: Queen gives formal consent for grandson Harry to marry Meghan Markle

@BarnardWestwood have been making Royal invitations since 1985, and Managing Director Austen Kopley said he was thrilled and honoured to be making them.

The card uses American ink on English card -- is printed in gold and black, and then burnished to bring out the shine and is gilded around the edge. They were printed by Lottie Small.

Lottie Small, who recently completed her apprenticeship, printed all of the invitations in a process known as die stamping, on a machine from the 1930s that she affectionately nicknamed Maude. pic.twitter.com/kWs2RFx7nN

Using American ink on English card, the invitations are printed in gold and black, then burnished to bring out the shine, and gilded around the edge. pic.twitter.com/gQpC6tDot0

The card is die-stamped in gold and includes the 'The Three Feather Badge' of The Prince of Wales.

Adding to the invite is the dress code for guests attending the nuptials -- Uniform, Morning Coat or Lounge Suit, or Day Dress with Hat.

Included in the 600 people list are the Royal Family, bride's parents, and the couple's friends who will get to attend the church service and lunchtime reception, given by the Queen. Later in the evening, 200 guests will travel to Frogmore House, where the royal bride and groom spent time together as their relationship matured. The invitations were posted this week. Also Read: Prince Harry, Meghan Markle love story to be made into a TV movie