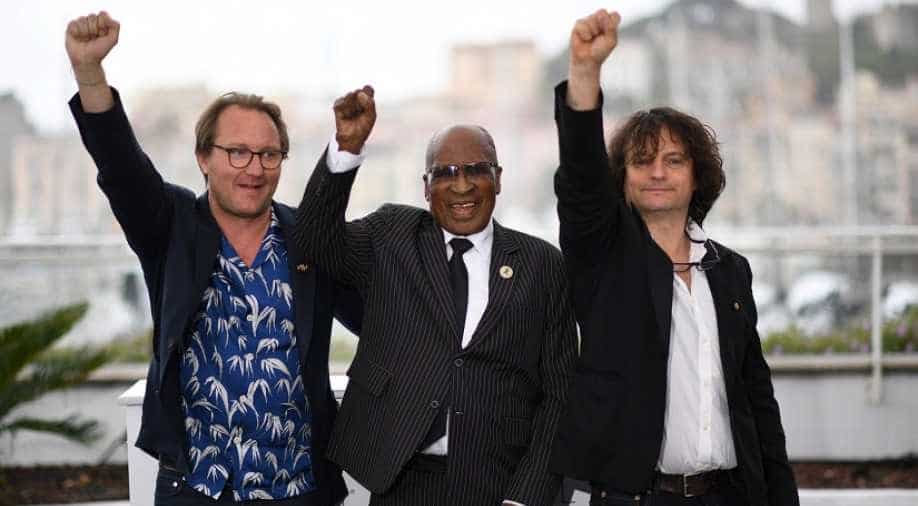 Half a century after the historic trial at which Nelson Mandela escaped the gallows, one of his fellow former prisoners walked the Cannes Film Festival red carpet Monday for the premiere of a documentary about those with him in the dock.

Andrew Mlangeni is one of the last surviving defendants of the 1963-1964 Rivonia trial of Mandela and nine others who faced the death sentence on charges of plotting guerrilla warfare and acts of sabotage against South Africa's apartheid regime.

"I knew that one day I would come out of prison ... But I never thought in my life I would ever come to France, never mind appearing in a film which is seen by the entire world," the 92-year-old, who spent 27 years behind bars, told AFP.

Mandela's impassioned three-hour address to the court, during which he declared that a democratic South Africa was an ideal "for which I am prepared to die", was the most significant of his career. It conferred a demi-god status on him that overshadowed the sacrifices of his co-accused.

The State Against Mandela and the Others, a French-funded documentary based on the recently released audio recordings of the proceedings, attempts to redress the balance by putting his comrade's centre stage.

The film uses animation, interviews and archival footage to show how the defendants turned a trial aimed at dealing a knockout blow to the anti-apartheid movement into an indictment of white supremacist rule.

"We decided we had to conduct this not as a criminal trial but a political trial," says Ahmed Kathrada, one of three former prisoners — one black (Mlangeni), one white (Denis Goldberg) and one of Asian origin (Kathrada) — interviewed for the feature.

Kathrada, who died last year, is one of the heroes of the documentary by journalist Nicolas Champeaux and filmmaker Gilles Porte.

Born into a family of Indian Muslim immigrants, he refused, like his comrades, to appeal his sabotage conviction to avoid the indignity of being seen to beg for clemency.

Animated charcoal drawings are used to recreate clashes between the preening prosecutor, depicted as a vulture in flapping black robes, and the accused, who refused to be bowed.

Powerful testimony from the likes of Mlangeni, who watched his parents work for whites "for peanuts", and Mandela's mentor Walter Sisulu, who complained of constant harassment of his family by the police, moved the world — and the judge.

At the end of the eight-month trial, the men were spared the noose. Mandela and seven others were sentenced instead to life in prison, a verdict they greeted with relief.

"It's life! And life is wonderful!" Goldberg recalls shouting across the courtroom to his mother.

But Mandela's ex-wife Winnie was already steeling herself for the long road ahead. "That's when my 'Amandla' (Power) started," she says in one of her last interviews before her death last month, uttering the rallying cry of the anti-apartheid movement with a clenched-fist salute.

For Champeaux, a former correspondent in South Africa who gained access to the 256 hours of digitised recordings, the trial had all the makings of an epic tale that needed to be shared.

"There's the bad guy, the traitor, the love story, the suspense, the inscrutable judge, the families trembling in the gallery," he told AFP. But it is also a reminder, he said, "that when you are wedded to a cause, those close to you suffer".

Coming ahead of the centenary of Mandela's birth, the film aims above all to remind the world that South Africa's tortured path to democracy was achieved by teamwork. It is a reminder, says Porte, "that all great things that happen in this world are achieved collectively".