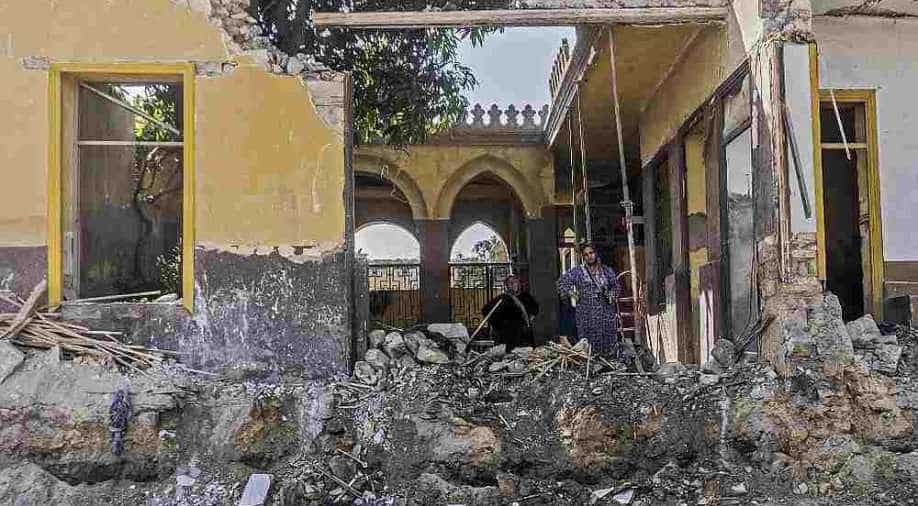 The city of dead Photograph:( AFP )

Dozens of bodies were displaced by the construction work in the second half of July, according to local media, to make way for the 17.5 kilometre (11 miles) Al-Ferdaous, or Paradise, highway.

Egyptian mother-of-three Menna said she was caught off guard when a bulldozer clearing space for a controversial highway flattened much of a mausoleum that doubled as her home in a sprawling cemetery.

"The earth mover suddenly hit the wall and we found ourselves throwing our things in a panic" outside, she told AFP.

"They kicked us out on the street," she said, surrounded by rubble and dust in the UNESCO-listed world heritage site.

Menna's parents and grandparents had made their home among the graves of the City of the Dead, the oldest necropolis in the Muslim world.

For those unable to afford prohibitively high rents in Egypt's capital, the burial chambers provide shelter for thousands like her.

Many built extensions to the original mausoleums, eking out a largely tranquil, if bizarre, existence side-by-side with dead sultans, singers and saints in the sprawling east Cairo cemetery.

But Menna said her peace -- and that of the dead -- was shattered by the arrival of workmen.

"It was awful. We moved the dead on straw mats," she said.

She and her husband shifted several bodies, including the remains of her father, to a segment of her home still intact.

Menna is now living with neighbours in part of the cemetery that is not in the demolition area.

Dozens of bodies were displaced by the construction work in the second half of July, according to local media, to make way for the 17.5 kilometre (11 miles) Al-Ferdaous, or Paradise, highway.

He is intent on transferring the centre of political power to a new capital, about 45 kilometres east of Cairo -- a mega-project in the desert overseen by the military's engineering arm.

He won his first term as president in 2014 and was re-elected four years later with more than 97 percent of the vote.

It is not just residents of the City of the Dead who are upset by the demolition work undertaken there.

Galila El-Kadi, a Marseille-based veteran architect and urban researcher, said the site is "an important component" of the capital's urban history.

It is full of ornately designed domes with chiseled Koranic verses that have been the object of fascination for orientalist painters and historians.

Kadi, who authored a book on the City of the Dead (al-Qarafa in Arabic), said the demolition had reached a historic perimeter where luminaries are buried, including Sultan Abu Said Qansuh of the Mamluk dynasty in the 15th century.

She said the demolitions would result in a loss of Cairo's "visual identity and its memory".

They reveal the "blind and arbitrary" character of a haphazard urban planning vision, driven by a "bulldozer policy", Kadi alleged.

UNESCO told AFP that it was "neither informed nor consulted" about the demolition work undertaken in July.

"The World Heritage Centre is following up with the Egyptian authorities to review the matter and assess any potential impacts on the Outstanding Universal Value, authenticity and integrity of the property," it added.

On social media, Egyptians have documented the urban destruction with photos of their family vaults as well as historic ones.

A Twitter user with the handle @morocropolis said his maternal family had maintained a vault in Qunsah Street since the 1940s.

He declined to give his full name fearing his criticism of the highway project would land him in trouble.

The authorities "told us that they needed part of the women's burial chamber, but they started to destroy the fence and the tombstones before the remains were moved," he told AFP.

He said he will not be eligible for compensation since the crypt was partially, rather than fully, destroyed.

Egypt's ministry of antiquities defended the work undertaken in the cemetery last month and said "there was no destruction of monuments".

Only "recent graves" were moved, it said.

But Menna said she is haunted by the disturbed bodies.

"They abuse the living and the dead, without mercy... and in the end, no one cares about us."