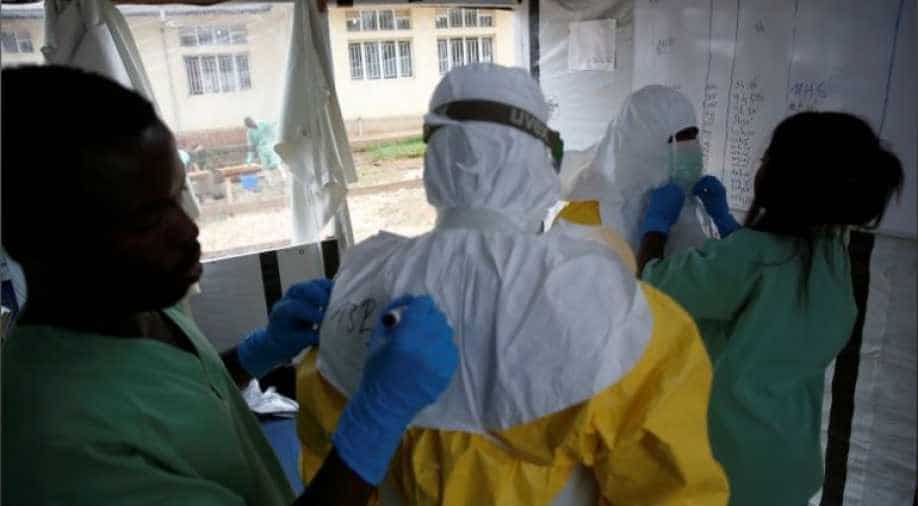 Health workers dress in Ebola protective suits before starting their shift at an Ebola transit centre in the town of Katwa near Butembo, in the Democratic Republic of Congo, March 25, 2019. Photograph:( Reuters )

Nearly 141,000 people have been vaccinated in the affected eastern DRC provinces of Ituri and North Kivu, the epicentre of the outbreak.

More than 1,500 people have died in a nearly 10-month-old outbreak of Ebola in the Democratic Republic of Congo, the health ministry said Monday.

Earlier this month, the virus claimed two lives in neighbouring Uganda among a family who had travelled to the DRC.

Nearly 141,000 people have been vaccinated in the affected eastern DRC provinces of Ituri and North Kivu, the epicentre of the outbreak.

Ebola spreads among humans through close contact with the blood, body fluids, secretions or organs of an infected person, or objects contaminated by such fluids.

The current outbreak in the DRC is the worst on record after an epidemic that struck mainly in Liberia, Guinea and Sierra Leone between 2014-2016, killing more than 11,300 people.

Chronic violence and militia activity in Ituri and North Kivu, as well as hostility to medical teams among locals, have hampered the response.

On Monday, a crowd of people opposed to the burial of two Ebola victims in the Beni area burnt the vehicle of a health team, local police chief Colonel Safari Kazingufu told AFP.

He said a member of the medical team had been injured in the attack and taken to hospital.

The United Nations in May nominated an emergency coordinator to deal with the crisis. However, the World Health Organization (WHO) said this month the outbreak currently did not represent a global threat.