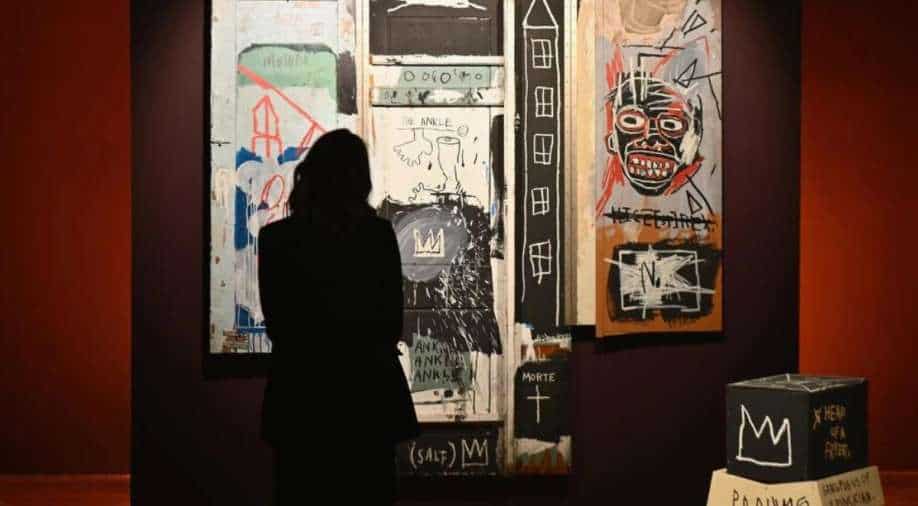 A woman looks at Jean-Michel Basquiat's 'Portrait of the Artist as a Young Derelict' during Christie's 20th and 21st Century Art press preview in New York in April 2022. Photograph:( AFP )

After Friday's confiscation, The New York Times reported that the paintings were done on scavenged pieces of cardboard and were largely unseen until this exhibit began in February

Amid questions about authenticity, Federal Bureau of Investigation (FBI) agents seized all 25 works at a Jean-Michel Basquiat exhibit in Florida, the museum which was showcasing the famous works said on Saturday (June 25).

As per reports by Times, the FBI seized the paintings with a warrant based on a 41-page affidavit that said the agency's probe had unearthed "false information related to the alleged prior ownership of the paintings."

The Orlando Museum of Art said the paintings are now in the hands of the law enforcement agency. The museum further noted that it had complied with a request for access to works at the show called "Heroes and Monsters: Jean-Michel Basquiat".

Emilia Bourmas-Fry, who is the museum spokeswoman, said in an email sent to the news agency AFP: "It is important to note that we still have not been led to believe the Museum has been or is the subject of any investigation."

After Friday's confiscation, The New York Times reported that the paintings were done on scavenged pieces of cardboard and were largely unseen until this exhibit began in February.

On the other hand, a report by The Times said that it had learned last month that one of the works was painted on the back of a shipping box that bore instructions to "Align top of FedEx Shipping Label here." The report quoted a designer who worked for Federal Express.

Notably, the instructions were in a typeface that was not used until 1994, six years after the artist died. Jean-Michel Basquiat was an American artist who rose to success during the 1980s as part of the Neo-expressionism movement.