Despite being COVID positive, Bolsonaro rides motorcycle, chats up workers 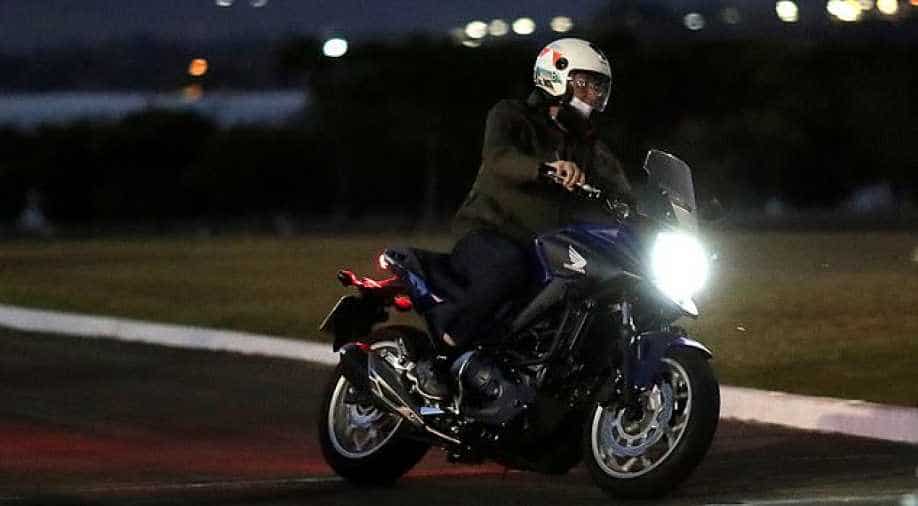 Bolsonaro has been in quarantine at the Alvorada Palace in Brasilia since testing positive for the novel coronavirus on July 7. He had to cancel upcoming travel plans after a new test came back positive again on Wednesday.

Brazil President Jair Bolsonaro refused to let COVID-19 get the better of him as he went for a spin on a motorcycle and chatted maskless with a team of groundskeepers outside the presidential palace on Thursday.

Bolsonaro has been in quarantine at the Alvorada Palace in Brasilia since testing positive for the novel coronavirus on July 7. He had to cancel upcoming travel plans after a new test came back positive again on Wednesday.

Photographs captured him taking a motorcycle for a spin on the palace grounds, stopping at one point to talk to a team of groundskeepers raking leaves -- despite his positive test result and the fact that neither he nor the workers appeared to be wearing face masks.

The 65-year old, who has been called a "Tropical Trump," has repeatedly defied social distancing guidelines by regularly hitting the streets for rallies by his supporters even as the pandemic exploded in Brazil.

The South American country has the second-biggest outbreak in the world, after the United States, with nearly 2.3 million infections and more than 84,000 deaths. Brazil registered its two highest daily numbers of new infections Wednesday and Thursday, with 67,860 and 59,961, respectively.

Bolsonaro, who has compared the virus to a "little flu" and condemned the economic impact of stay-at-home measures to contain it, said on Facebook he was feeling "great."

"We're concerned with protecting lives, but the collateral damage from these (stay-at-home) policies is going to kill a lot more people than the virus," he said.

The far-right leader also admitted in a live Facebook video Thursday that he was feeling "a bit wretched at being imprisoned here."

Bolsonaro has also been spotted in the gardens feeding -- and occasionally getting bitten by -- rheas, a South American bird related to the emu.