Despite a punishing drought, San Diego has water. It wasn’t easy. 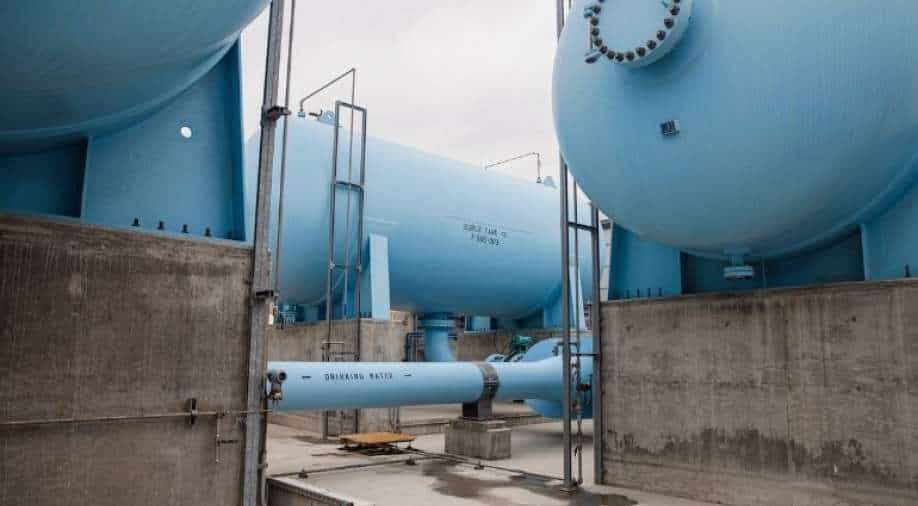 In this coastal desert metropolis, life has stayed mostly the same for residents already accustomed to conserving what they have long treated as a precious resource

In many parts of California, reminders abound that the American West is running out of water. “Bathtub rings” mark the shrinking of the state’s biggest reservoirs to some of their lowest recorded levels. Fields lie fallow, as farmers grapple with an uncertain future. A bed-and-breakfast owner spends $5 whenever a tourist showers.

But not in San Diego County.

In this coastal desert metropolis, life has stayed mostly the same for residents already accustomed to conserving what they have long treated as a precious resource.

On a recent afternoon, boats sped over the silvery surface of San Vicente Reservoir, a key water-storage site for the county about 25 miles northeast of downtown San Diego. It was about as full as usual, cutting a sharp contrast with the desiccated lake beds where state officials have appeared in recent months, pleading with Californians to save water. The San Diego County Water Authority estimated that it would have sustainable water supplies through 2045, even if dry conditions persisted for years.

Now, with San Diego facing the prospect of orders to use even less water, its relative water plenty has become a case study in the uneven ways that the Western drought is affecting the nation’s most populous state. And the county’s try-everything approach to getting water has emerged as a model for cities — including Denver and Albuquerque, New Mexico — where leaders are dealing with one of climate change’s most dire effects.

“There are no silver bullets anywhere,” said Jeffrey Mount, a senior fellow with the Public Policy Institute of California’s Water Policy Center, who noted San Diego’s strides. “They’re definitely in the upper echelon of these creative approaches.”

A hot, dry, fiery summer has deepened the West’s water crisis. In July, Gov. Gavin Newsom called on all Californians to voluntarily cut their water use by 15%. That month, statewide water use decreased by a little less than 2% over the previous year. In parts of Southern California, residents actually used more water.

State officials, including Newsom, have said repeatedly that they hope to avoid mandating severe water-use reductions like the ones ordered by the governor’s predecessor, Jerry Brown, in 2015. Back then, Brown imposed a 25% reduction on the state’s 400 local water supply agencies — a move Mount described as a “blunt instrument” that angered many urban Californians forced to let their lawns die.

Nevertheless, state leaders have said they were not ruling out mandatory restrictions if the voluntary efforts do not save enough water through the fall.

The worsening conditions are forcing Californians to confront a fundamental divide: Rural Northern California is home to the bulk of the state’s water supplies — in reservoirs and underground — and yet much of it is piped south to thirsty cities and farms located on inhospitable lands.

Some urban water agencies in Southern California — like the ones that manage San Diego’s water — have enforced restrictions and spent billions of dollars to ensure they are equipped to weather inevitable periods of drought. So they are bristling at suggestions they might be ordered to cut back, alongside others who have not adequately prepared for lean times.

“During a time of crisis, there is the logical and appropriate belief that everyone should do their part,” Mount said. “The question is: What if they’ve done their part ahead of time?”

San Diego water officials have said that state-mandated cutbacks this time would be an unfair punishment for residents of a region who have already ponied up for higher water bills and willingly changed their habits to save water.

“To move the needle — we’re already so low from the last drought, there’s not much more we could do,” said Brian Hojnacki, a management analyst for the city of San Diego’s water utility.

The city of San Diego was among the first in the state to introduce many of the water-use restrictions that have become familiar to Southern Californians. Residents are barred from watering their yards during much of the day. Restaurants are not allowed to serve customers water unless they specifically request it. Schoolchildren have been taught songs to help them remember to conserve.

Francisco Pantaleon, 40, even remembered his mother instructing him to save pool water as a child in Oceanside, a suburb in the northern part of the county: “Don’t come in and out and splash.”

For much of the past century, San Diego was almost entirely dependent on water that came from elsewhere in the state or from the Colorado River. Its supplies were effectively controlled by water officials in Los Angeles — a contentious relationship that seeded long-running legal battles.

In 1991, during a punishing drought, San Diego reached a turning point. The Metropolitan Water District, the Los Angeles-based wholesaler that controlled nearly all of San Diego’s water, slashed the county’s supply by 30% for a little more than a year. Grass turned brown. Residents put bricks in their toilet tanks to make them flush less water.

And, crucially, the region’s burgeoning biotechnology industry was hammered by water shut-offs that came with little warning.

Joe Panetta, president and chief executive of Biocom California, a biotech advocacy group formed largely in response to that crisis, recalled panic as projects that cost tens of thousands of dollars were ruined. Researchers could not wash lab equipment.

The group took its cause to city and county leaders.

“We told them it’s going to do tremendous harm to this young industry if the water is shut off,” Panetta said.

After that, San Diegans made a collective vow: Never again.

In 1996, the San Diego County Water Authority struck a landmark agreement to buy water from farmers in the Imperial Valley, in California’s southeastern corner, that heralded the beginning of the region’s water divorce from Los Angeles.

Over the following two decades, the agency took on a series of significant — and expensive — infrastructure projects aimed at establishing more diverse sources of water, more places to keep it and more ways to move it around the county.

In 2010, the authority lined canals in the Imperial Valley with concrete to prevent water from seeping into the earth and made a deal to take the water saved by the process — some 26 billion gallons a year. The authority finished raising the San Vicente Dam in 2014, adding more capacity to San Vicente Reservoir in the biggest water-storage increase in the county’s history.

Then there was the long, fraught gestation of a seawater desalination plant, the largest in the United States and now the envy of desperate communities up the coast, despite environmental concerns. Since 2015, millions of gallons of seawater have flowed into the $1 billion facility in Carlsbad each day, where it is filtered into something that tastes like it came from an Evian bottle, not the Pacific Ocean.

Across the county, restrictions and conservation pushes have led per capita water use to fall by half over the past three decades.

The next major task? Expand the region’s so-called pure water programs, once given the derisive moniker “toilet to tap,” because they purify gray water to make it drinkable. Today, such programs are seen as some of the most promising paths forward, not just in San Diego but across the state. (The system in neighboring Orange County is often cited as a gold standard.)

San Diego has provided a road map for others now scrambling for water, said Toni Atkins, who is the president pro tem of the California Senate and previously served on the San Diego City Council. And she is proud of that.

Still, Atkins said, her charge is to look at the bigger picture, and that means making decisions that will protect the whole state. That could mean sharing the burden as the drought continues.

Although San Diego has come up with more ways to get water locally, it still gets most of its water from outside the county, including from the shrinking Colorado River.

“The resentments are still going to be there; everybody wants to make sure they get the water they need,” she said. “Like with wildfires and the pandemic, we’re all in this together.”

But residents say they would be hard-pressed to find other ways to trim.

“We’ve done a lot already,” Paul Rodriguez, 61, said in his kitchen while puzzling over the prospect.

Down the hall of the compact ranch house he and his wife share in Chula Vista, the county’s second-largest city, the couple had installed a low-flow toilet and shower.

He looked out at the native plant garden that replaced their lawn several years ago. Monarch butterflies floated among milkweeds. The couple waters the yard once every three weeks.