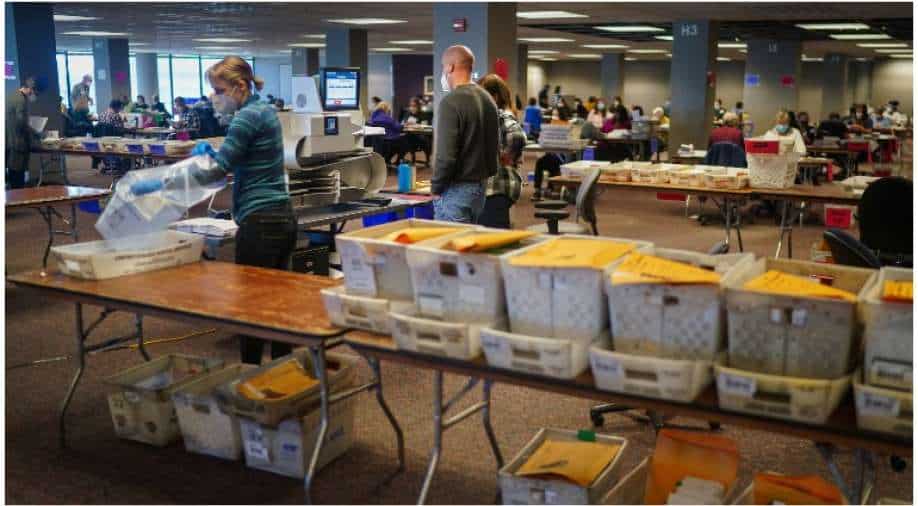 Partial results suggested that House Democrats were running strong in many of the competitive districts they swept up in 2018, but they were struggling to make further inroads into the Republican-leaning suburbs, where they had expected a surge powered by discontent with President Donald Trump

Democrats were on track early Wednesday to maintain a firm grip on the House, but their path to seizing the Senate majority from Republicans was rapidly narrowing as the two parties continued to fight for control of the levers of power in Congress with the fate of the presidency still uncertain.

Partial results suggested that House Democrats were running strong in many of the competitive districts they swept up in 2018, but they were struggling to make further inroads into the Republican-leaning suburbs, where they had expected a surge powered by discontent with President Donald Trump.

Instead, as votes continued to be counted, Republicans were newly optimistic they could claw back seats, particularly in rural areas and traditionally conservative strongholds in places like Oklahoma City and Staten Island.

The Senate outcome rested on a handful of states where Democrats still hoped to topple incumbent Republicans, but their pickup opportunities were dwindling fast on an unusually large battleground that stretched from Maine to Alaska and could tilt with the presidential results.

At stake was the ability of the next president to fill his Cabinet, appoint judges and pursue his agenda, and the two parties had waged a pitched battle to the end, pummeling voters with advertising backed by record sums of money, totaling hundreds of millions of dollars.

Republicans scored crucial wins in Iowa, Alabama and Montana, and were running stronger than expected in North Carolina and Maine, where the results were still too close to call early Wednesday.

Democrats needed a net gain of three or four seats to take Senate control — depending on whether former Vice President Joe Biden, the Democratic nominee, won the presidency, which would allow his vice president, Kamala Harris, to cast tiebreaking votes.

But Tommy Tuberville, the former Auburn football coach, easily won back deep-red Alabama from Sen. Doug Jones. In Iowa, the victory by Sen. Joni Ernst over Theresa Greenfield, a Democrat with roots in the state’s farming community, scuttled Democrats’ hopes for a key pickup. And in Montana, Sen. Steve Daines beat back a challenge from the state’s popular Democratic governor, Steve Bullock.

Earlier, Republicans had breathed a sigh of relief when Sen. John Cornyn was declared the winner in Texas, despite a record turnout, and again when Sen. Lindsey Graham, a close ally of Trump’s, won reelection in South Carolina after a tougher-than-expected race.

In Kentucky, Sen. Mitch McConnell, the top Republican, secured a seventh term, although it was unclear whether he would remain majority leader.

“Tonight, Kentuckians said, ‘We’re not finished yet,’” McConnell told supporters in Louisville. “Kentucky wants more of the policies that built the best economy in our nation’s modern history — not socialism.”

At least one Senate race taking place in Georgia, an unexpectedly competitive battleground this year, was headed for a winner-takes-all January runoff that could decide the balance of the Senate only weeks before Inauguration Day if Tuesday’s contests did not. The state’s other race could also end up in a runoff, but it was too early to be certain.

In the fight for the House, Democrats began the night more clearly on the offensive, bolstered by a stunning fundraising advantage, Republican recruitment failures and Trump’s eroding support in America’s cities and suburbs.

Two years after gaining 41 seats to reclaim the majority, Democrats were trying to push into suburban districts that Republicans had not lost in decades around St. Louis, Indianapolis, Atlanta, Phoenix, Omaha and even once ruby-red parts of Texas.

But while strategists in both parties had said a second blue wave could wash out 10 to 20 Republicans, by Wednesday morning, returns indicated that no such sweep had materialized. A handful of Republican incumbents in newly competitive suburban districts held onto their seats, and some Democrats who had been confident of victories were vanquished, including first-term Rep. Joe Cunningham of South Carolina, who was defeated by Nancy Mace, the first woman to graduate from the Citadel, in his Charleston-based district.

At the same time, Democrats fell short of snatching victories in solidly red districts that the party had hoped to make competitive, and lost more ground in the increasingly conservative rural Midwest, with the defeat of Rep. Collin Peterson of Minnesota, chairman of the Agriculture Committee, who served three decades in Congress.

“We have held the House and now, when — after all the votes are counted, we’ll see how much better we will do than that,” Speaker Nancy Pelosi said Tuesday night. But she also tried to play down Democrats’ lackluster performance.

“It’s not just about the quantity,” she added. “It’s about the quality of leadership that they provide for our country.”

Republicans began the cycle hoping to grab onto Trump’s coattails and a booming economy to wrest back the 30 or so districts he won in 2016 that Democrats claimed two years later. But those hopes were dashed by the pandemic, which has left the economy in tatters and the nation counting more than 230,000 deaths to date.

Republican veterans Ann Wagner of Missouri, Steve Chabot of Ohio and Rodney Davis of Illinois also held off stiff challenges, and Republicans were on track for better-than-expected result in a handful of Texas House races where Democrats had sought pickup opportunities.

The battle for the Senate was being waged on even friendlier turf for Republicans. Although they were defending 23 states, compared with just 12 for Democrats, almost all of them were places that Trump carried in 2016 — creating a real possibility that voters could render a split decision Tuesday, dividing power between the White House and Senate.

For the second election season in a row, Democrats ran with an almost singular focus on health care, blistering Republicans for their campaign to overturn the Affordable Care Act. The law, and its protections of preexisting conditions, took on further resonance in the face of a public health crisis unlike any the nation has seen in generations and the confirmation just a week before Election Day of a Supreme Court justice, Amy Coney Barrett, who Democrats argued would strike down the law.

In race after race, Republicans’ chances appeared to hinge on the unexpected strength of Trump, a polarizing leader who has enraptured their core supporters even as his inflammatory style and unorthodox policy positions have frustrated them and alienated crucial voting blocs. A few Republicans, like Sen. Susan Collins of Maine, who was battling for political survival in the race of her career, were willing to wag their fingers at the president, but most knew they could not risk his ire, or the support of his loyal base, if they were to have any shot at reelection.

Worried about Trump’s chances, though, many Republicans closed their campaigns with warnings to voters of the risks posed by putting the White House and Congress under full Democratic control.

In North Carolina, Cal Cunningham, a telegenic Iraq War veteran who led for much of the year, was at grave risk of falling short in his effort to oust Republican Sen. Thom Tillis. Tillis had a lead of nearly 100,000 votes early Wednesday, but North Carolina accepts postmarked mail-in ballots until Nov. 12, making a final call premature.

The race in Maine has been just as steady, with the Democrat, Sara Gideon, the speaker of the state Legislature, threatening to unseat Collins, a four-term Republican and one of the last centrists left in her party. After easily winning reelection in 2014, Collins struggled to stay afloat as her race became a national referendum on the Republican Party, and she was battling to win a majority to avoid activating the state’s newly enacted ranked-choice voting system, which could badly hurt her chances.

“We’ve never given up because that is what we Mainers do — we work hard, we show up for work every day and we get the job done,” Collins told her supporters, addressing them in a snowy parking lot in Bangor. “I wish that I could thank each of you by name, that would take all night — on the other hand, we may be here all night.”

Democrats remained hopeful about two races in Georgia, where Jon Ossoff, a 33-year-old documentary filmmaker, had mounted a strong challenge to Sen. David Perdue, and the Rev. Raphael Warnock was challenging Sen. Kelly Loeffler in a special election to replace the retired Republican senator Johnny Isakson. With multiple Democratic and Republican candidates splitting the vote, Loeffler was headed to a runoff with Warnock, after Republican Rep. Doug Collins conceded. Ossoff and Perdue could end up in a runoff, too, but were both still jockeying to clear the 50% required under Georgia law to win outright.

McConnell, 78, handily beat back a challenge from Amy McGrath, a former fighter pilot. Democrats poured $100 million into the contest, but McGrath never commanded the kind of support in the solidly Republican state to make the incumbent nervous.

Both parties had other targets, but they were considered stretches. For Republicans, the best option was Michigan, where John James, a Black Iraq War veteran who ran for the Senate unsuccessfully in 2018, was trying to unseat Sen. Gary Peters. Democrats believed they had an outside shot of defeating Dan Sullivan in Alaska.

The outcome of the Senate contest promised to heavily shape the next two years in Washington. If Democrats were able to grab control of the House, Senate and White House at once for the first time since 2010, they could abolish the legislative filibuster — the last major vestige of minority rights in the Senate — and push through an ambitious slate of bills on voting rights, gun safety, policing and prescription drug prices. They would most likely reserve much of their political capital for expanding the Affordable Care Act and raising taxes on the wealthy to offset that and other new programs.

Nodding to the possibility of all-Democratic control, McConnell warned during his victory speech: “This is no time to declare war on our institutions because one side is angry that the framers made it hard to achieve radical change.”

But Democrats feared that even if Biden were to win, they could fall short in the Senate, saddling the incoming president with a Republican majority ready to oppose him on nearly every front, dashing liberal hopes and swiping his agenda off the table. Facing a Senate led by McConnell, Biden could even have an uphill battle winning its approval to fill his Cabinet, and he would certainly face opposition to liberal nominees to the federal courts.

Similarly, if Trump were reelected and Democrats controlled both the House and Senate, his second term could be a frustrating exercise in stalemate.