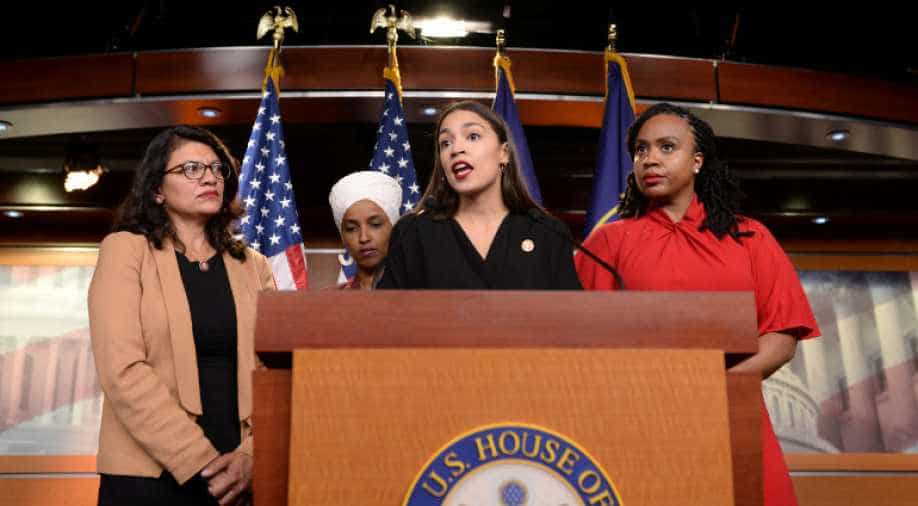 The four -- Alexandria Ocasio-Cortez of New York, Rashida Tlaib of Michigan, Ilhan Omar of Minnesota and Ayanna Pressley of Massachusetts -- struck back at a news conference Monday and urged people not to 'take the bait'

Democratic congresswomen targeted in a xenophobic tirade by President Donald Trump hit back Monday, saying he was trying to distract attention away from his policies with his "blatantly racist attack."

The president first attacked the four lawmakers -- all but one of whom were born in America -- with a series of tweets on Sunday, saying they should "go back" to their countries of origin.

The four -- Alexandria Ocasio-Cortez of New York, Rashida Tlaib of Michigan, Ilhan Omar of Minnesota and Ayanna Pressley of Massachusetts -- struck back at a news conference Monday and urged people not to "take the bait."

Trump was simply trying to distract with his "blatantly racist attack" on the four women of color, Omar said.

"This is the agenda of white nationalists," she said.

Pressley also urged the American people "to not take the bait."

"This is simply a disruption and a distraction from the callous chaotic and corrupt culture of this administration, all the way down," Pressley said.

The four lawmakers -- who have been nicknamed "The Squad" by some media -- said attention should instead be focused on healthcare and immigration and, in particular, the treatment of asylum seekers on the southern border.

"Weak minds and leaders challenge loyalty to our country in order to avoid challenging and debating the policy," said Ocasio-Cortez.

Trump "does not know how to defend his policies, so what he does is attack us personally, and that is what this is all about," she said.

Tlaib said Trump's tweets and remarks were "a continuation of his racist and xenophobic playbook."

"We cannot allow these hateful actions by the president to distract us from the critical work to hold this administration accountable to the inhumane conditions at the border that is separating children from their loved ones and caging them up in illegal, horrific conditions," she said.

Omar and Tlaib repeated calls for Trump to be impeached.

Watch: Congresswomen call Trump's attack an attempt to distract from his policies

The president also came under fire from some members of his Republican party but remained unrepentant.

"All they do is complain," Trump told reporters at a White House event featuring products made in America.

"These are people that hate our country," he said of the four lawmakers.

"If you're not happy here, you can leave."

Trump also accused the four first-term congresswomen -- who are of Hispanic, Arab, Somali and African American origin -- of having "love" for US "enemies like Al-Qaeda."

Asked by a reporter whether he was concerned that many people saw his comments as racist, Trump said: "It doesn't concern me because many people agree with me."

Trump's extraordinary attacks on the lawmakers prompted critical reactions from foreign leaders and outrage from Democrats.

Republicans were initially silent, but on Monday several of his party faithful began to speak up.

"My view is that what was said and what was tweeted was destructive, was demeaning, was disunifying, and frankly it was very wrong," said Senator Mitt Romney, a Republican from Utah.

"There is no excuse for the president's spiteful comments -- they were absolutely unacceptable and this needs to stop," said Senator Lisa Murkowski, a Republican from Alaska. "We must demand a higher standard of decorum and decency."

Republican Senator Susan Collins of Maine said she disagreed with the policies espoused by the "far-left" Democratic lawmakers, but that Trump was "way over the line."

Texan Will Hurd, the only black Republican in the House of Representatives, told CNN that Trump's behavior was "unbecoming of the leader of the free world."

"I completely and utterly disagree with him," she told Radio New Zealand, noting that her country welcomed diversity in the corridors of power.

Trump's comments appear to be aimed at galvanizing his mostly white electoral base ahead of the 2020 presidential vote -- while also stoking racial tensions and divisions among his political opponents.

"With his deliberate, racist outburst, @realDonaldTrump wants to raise the profile of his targets, drive Dems to defend them and make them emblematic of the entire party," said David Axelrod, who served as chief strategist for Barack Obama's two White House campaigns.

In his initial Twitter attack on Sunday, Trump -- who before becoming president pushed the racist "birther" conspiracy theory that Obama was not born on US soil -- said the congresswomen came from corrupt, poorly managed countries to which they should return.

Ocasio-Cortez, Tlaib and Pressley were all born in the United States while Omar arrived as a refugee from war-torn Somalia, which she fled as a child.

Former vice president Joe Biden, who is seeking the 2020 Democratic presidential nomination, denounced Trump as the most "openly racist and divisive" president in US history.

"Go home to your country? It's sickening, it's embarrassing," Biden said.