Deep freeze grips US Midwest, blamed for at least 12 deaths 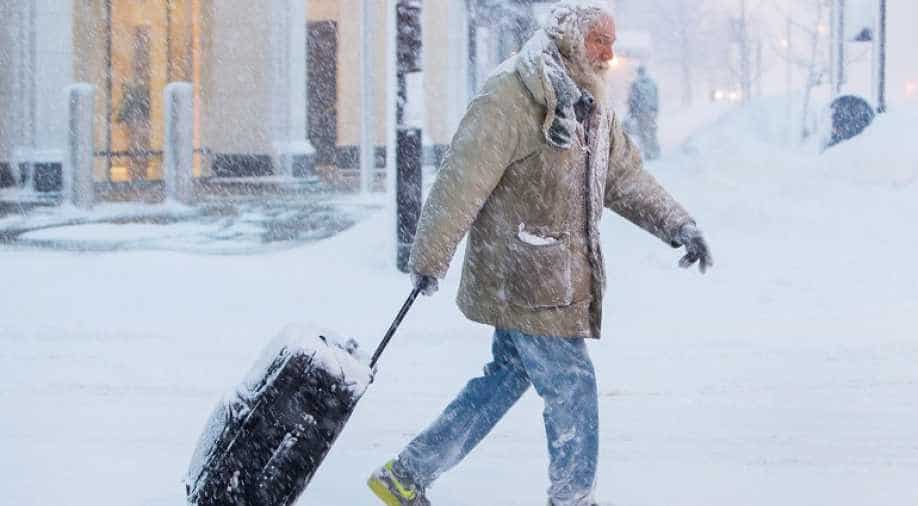 Classes were cancelled for Wednesday and Thursday for students across the Midwest, including Chicago, home of the nation's third-largest school system, and police warned of the heightened risk of accidents on icy highways.

A blast of icy polar air brought dangerously low temperatures to the US Midwest on Wednesday, causing at least three more deaths while halting mail delivery and forcing residents who pride themselves on their winter hardiness to huddle indoors.

Classes were cancelled for Wednesday and Thursday for students across the Midwest, including Chicago, home of the nation's third-largest school system, and police warned of the heightened risk of accidents on icy highways. Michigan said all state offices would remain closed through Thursday.

In a rare move, the US Postal Service appeared to set aside its credo that "neither snow nor rain ... nor gloom of night" would stop its work as it suspended deliveries from parts of the Dakotas through Ohio.

At least a dozen deaths related to extreme cold weather have been reported since Saturday in Michigan, Iowa, Indiana, Illinois, Wisconsin and Minnesota, according to officials and media reports.

Illinois State Police officers rescued 21 people who were stranded in a charter bus that broke down in sub-zero temperatures along Interstate 55 near Auburn after the vehicle's diesel fuel turned to gel in its engine, according to the agency.

A University of Iowa student was found dead outside a building at the campus early on Wednesday, the school said in a statement. The death of Gerald Belz, a pre-med student, was believed to be weather-related.

Streets in Chicago were nearly empty, with few people walking outside in the painfully cold air as temperatures hovered around 18 degrees below zero Fahrenheit (minus 28 Celsius).

"It's terrible!" Pasquale Cappellano, a 68-year-old waiter, said as he smoked a cigarette while waiting outside for a bus on Chicago's North Side. "I gotta pick up my medication at Walgreens or else I wouldn't be out the door."

In Minneapolis, chilled to minus 14 F (minus 26 C), Brian Pierce ventured out to "embrace the elements" and found himself watching cars slipping on the roads.

"The roads sound really weird, it seems there’s a lack of grip," he said. "And my teeth hurt."

Wind-chill temperatures in parts of the Northern Plains and Great Lakes plunged as low as minus 42 F (minus 41 C) in Park Rapids, Minnesota, and to 31 degrees below zero F (minus 35 C) in Fargo, North Dakota, according to the National Weather Service (NWS). The frigid winds began to blow into the U.S. East Coast later on Wednesday, sending temperatures plunging there.

More than a thousand flights, close to two-thirds of those scheduled, were cancelled on Wednesday into or out of Chicago O'Hare and Chicago Midway international airports, according to the flight tracking site FlightAware.

The Amtrak passenger rail service cancelled all trains in and out of Chicago on Wednesday.

At the Morning Joy Farm in Mercer, North Dakota, Annie Carlson said her horses and sheep were doing fine.

"They can go into the barn if they wish," she said. "They're snuggled in, warm and toasty." Her chickens, ducks and guinea hens were enjoying the 70-degree F (21 C) climate inside their greenhouse-like hoop house, she said.

Andrew Orrison, a meteorologist with the NWS, said some of the coldest wind chills were recorded in International Falls, Minnesota, at minus 55 F (minus 48 C). Even the South Pole in Antarctica was warmer, with an expected low of minus 24 F (minus 31 C) with wind chill.

Temperatures in Chicago will drop again "quite precipitously" on Wednesday night, Orrison said, potentially breaking the record low of minus 27 F (minus 33 C) on Jan. 21, 1985, the day of Ronald Reagan's second presidential inauguration.

Banks and stores closed for business. Waste Management Inc, a major trash collection company, said it cancelled pickups in counties across the Midwest on Wednesday and Thursday.

The bitter cold was caused by a displacement of the polar vortex, a stream of air that normally spins around the stratosphere over the North Pole but whose current was disrupted and was now pushing south.

Officials opened warming centres across the Midwest, and in Chicago, police stations were open to anyone seeking refuge. Five city buses were also deployed to serve as mobile warming centres for homeless people, while city police handed out hats, jackets and blankets.

The Chicago Police Department said it was urging people to get out of the cold. "But we will never force someone," police officer Michael Carroll said.

U.S. homes and businesses will likely use record amounts of natural gas for heating on Wednesday, according to energy analysts.

Some residents just to the north and northwest of the Twin Cities in Minnesota were asked by Xcel Energy to dial down their thermostats to 60 F (16 C) because of the strains on its natural gas supply system.

The Michigan Agency for Energy said the state's utility companies had agreed not to shut off gas or electric supplies to delinquent customers for the rest of the week.

Donald Trump orders 9,500 US troops to depart from Germany