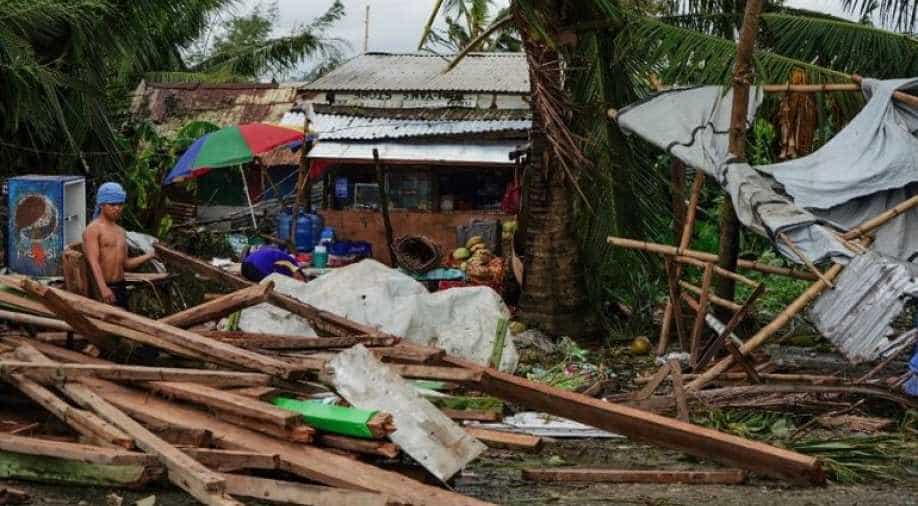 File Photo: A resident looks at a house damaged at the height of Typhoon Phanfone in Tacloban, Leyte province in the central Philippines. Photograph:( AFP )

Typhoon Phanfone hit late on Tuesday with winds of up to 120 kph and gusts of 150 kph, damaging hundreds of homes and causing flooding in eight areas.

The death toll from a Christmas typhoon that tore through the central Philippines rose to 28 on Friday, with 12 people missing, the disaster agency said, as authorities moved to restore power and residents tried to repair damaged homes.

Typhoon Phanfone hit late on Tuesday with winds of up to 120 kph and gusts of 150 kph, dumping sheets of uninterrupted rain on a string of islands, damaging hundreds of homes and causing flooding in eight areas.

It was the seventh typhoon to strike the Philippines this year and came as millions of people in the predominantly Catholic country were heading home to celebrate Christmas with families.

There was widespread travel disruption with 115 flights cancelled and thousands of people stranded by the suspension of ferries due to storm surges.

It was unclear how the deaths occurred, but officials said some were hit by trees, electrocuted or drowned.

"People did not expect that the storm would be that devastating," said disaster agency spokesman Mark Timbal.

Though less powerful than other typhoons this year, Phanphone made landfall in some of the country's poorest and least-developed islands.

Among them was the island of Samar, which bore the brunt of Typhoon Haiyan in 2013, the Philippines' most powerful and deadliest storm on record. It killed more than 6,300 people.

Residents, there were clearing debris, with wooden pillars and sheets of a corrugated iron roof that were once homes, scattered across the ground. Men pulled tried to recover fishing boats with tangled or damaged outriggers.

Samar resident Virgilo Catayas, whose sibling was among those killed by Haiyan, said he lost another to hypertension when Phanphone hit.

"We can't really do much if that's what happened, we'll have to accept it," he told broadcaster ABS-CBN. "The important thing is to stay strong," he said, sitting next to a casket.

Television showed minor damage to the airport at Kalibo, an alternative gateway to the holiday island of Boracay, while the disaster agency said 55 schools had suffered some damage.

Images on social media showed government workers clearing trees from roads, with a clear blue sky after the storm moved out over the South China Sea late on Wednesday.