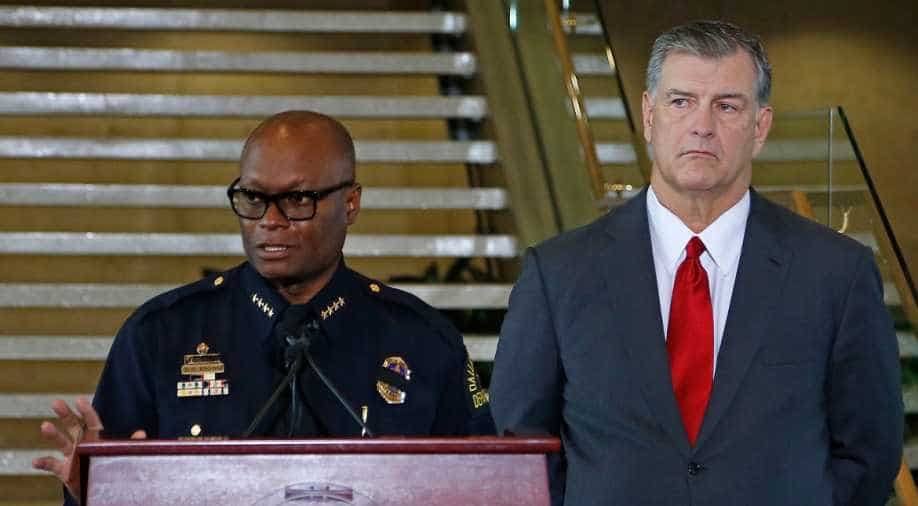 'We are heartbroken. This must stop. This divisiveness between our police and our citizens,' said Brown (left). Photograph:( Getty )

Follow Us
As America reeled from a week of violence pitting police officers against civilians, Dallas police chief David Brown came to personify the nation's trauma.

After a black army veteran killed five white officers at a peaceful march in the Texas city, the 55-year-old police chief, who is African-American, delivered a simple but poignant message.

"We are heartbroken," he said. "This must stop. This divisiveness between our police and our citizens," Brown insisted.

Shortly after Brown took the helm of the Dallas police force in 2010, his 27-year-old son, David Brown Jr, fatally shot an officer and another man while high on drugs, before being killed by police.

The city's top cop and Dallas native - who was moved to join the force to confront a crack cocaine epidemic in his own inner city neighborhood - also lost both his brother and a former police partner to gun violence.

"That man went through a lot," said Ron Franklin, one of the many Dallas residents come to pay tribute at a memorial outside the police headquarters.

"I can feel his pain. He's trying to do the best that he can do," the resident said further.

Despite the blows he has suffered, Brown is steadfast in his drive to help mend the nation's fraying social fabric and burnish the image of law enforcement.

"Police officers are guardians of this great democracy," Brown said Friday, the day after the atrocity.

"The freedom to protest, the freedom of speech, the freedom for expression. All freedoms we fight for with our lives; it's what makes us who we are as Americans," he affirmed.

As police chief, Brown has gained national recognition for his progressive approach to law enforcement, working to cultivate more amicable relations between cops and community members.

"He's human. He understands a lot of different sides. Not just his own. Not just from a police perspective," said Julie Gavran, the southwest director of the organisation Keep Guns Off Campus.

"He's got a lot of experience and I think he brings that to the course, and that opens dialogue that's much needed," said the gun control activist.

Despite facing initial internal reluctance, Brown has geared the force away from violence as a first resort, training cops with simulation exercises to de-escalate confrontation without using their weapons.

Department statistics have shown a steady decline in the number of officer-involved shootings since 2012, which last year dropped to their lowest level in a decade.

"Our chief in the last couple of years has done great things to strengthen the community and the relationship with the police department," said Gavran.

This increasing conviviality was evident on Thursday, as police and residents shook hands and took selfies in the hours before gunman Micah Johnson opened fire, turning the demonstration into a chaotic combat zone.

In the wake of the attack, Brown came to appear, as he briefed a stunned public on the tragedy in Texas, more like a political leader than a cop.

"We are not going to let a coward who ambushed police officers change our democracy," Brown said. "Our city, our country, is better than that."

University of Iowa sociologist Jessica Welburn said the fact that Brown is black man leading a major police force of 3,500 officers marked a "step in the right direction."

"He definitely seems to have experienced each side of the situation," Welburn said. "He definitely recognises the position he is in."

She was less sure, though, whether Brown's words can really help heal the wounds that have given rise to the Black Lives Matter protest movement.

"The chief only has so much power. His words can only go so far."

As for being thrust into the spotlight, Brown's message has been one of humility.

"This city has embraced me as its police chief," he said on CNN's "State of the Union."

"I have always felt a sense of urgency about delivering police service.

"But I never wanted this job to be about me."