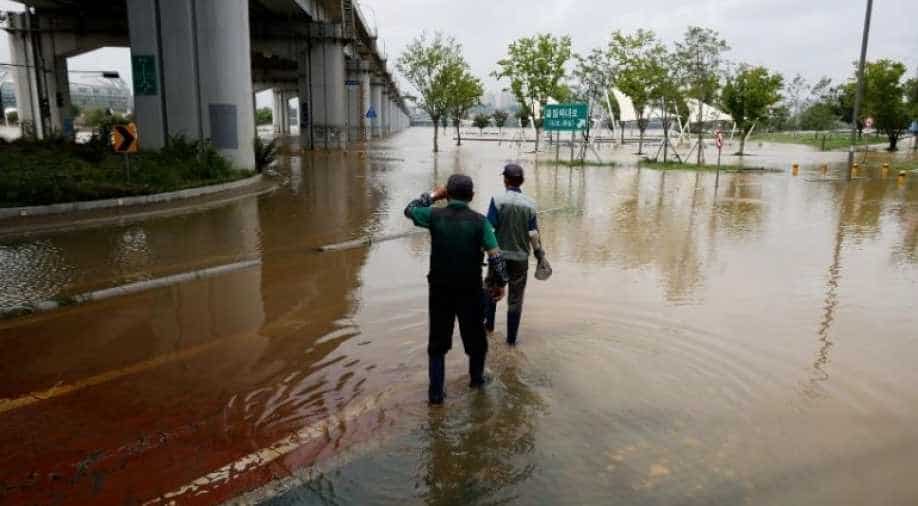 At least 15 people have been killed and more than 1,500 forced from their homes after 42 consecutive days of rain

South Korean officials are working to keep more than a thousand people displaced by flooding safe and healthy with anti-coronavirus measures in place at crowded shelters as the government weighed declaring disaster zones on Wednesday.

At least 15 people have been killed and more than 1,500 forced from their homes as 42 consecutive days of rain - South Korea's longest monsoon in seven years - triggered floods and landslides.

More than 1,146 people remained in temporary shelters set up in gyms and community centres as of Wednesday, the Ministry of the Interior and Safety said, with measures implemented at the facilities to prevent the spread of the coronavirus.

Fabric enclosures were set up for families and individuals, with beds spaced apart to encourage social distancing.

Local governments designated managers to check people's temperatures and screen for any COVID-19 symptoms, and displaced residents were asked to wear masks and wash their hands, health authorities said.

South Korea has reported 14,456 coronavirus cases, including 33 new cases as of midnight on Tuesday, with 302 deaths.

Prime Minister Chung Sye-kyun told a meeting of government officials the health ministry should declare three provinces in northern South Korea as special disaster zones, which would entitle them to receive additional aid from the national government.

While the reports did not mention any specific damage, North Korea has historically been vulnerable to flooding.

The rain appears to be hitting some of the major rice-growing areas of North Korea, and come as anti-coronavirus border closures restricted key agricultural supplies such as fertilizer from China, said Choi Yong-ho, research fellow at the Korea Rural Economic Institute in Seoul.

"This flooding will have a negative impact for North Korea's food supply," he said.