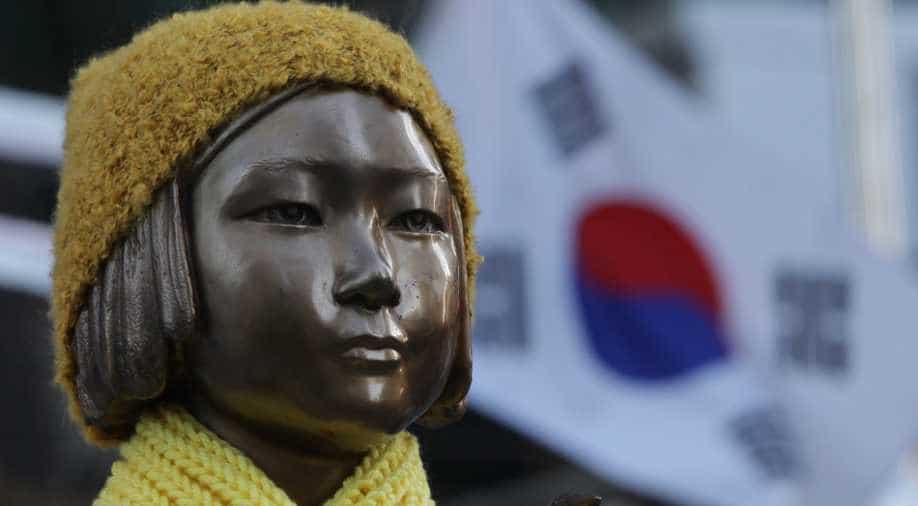 A file photo of a statue of a girl symbolising the issue of 'comfort women' in Seoul, South Korea. Photograph:( Getty )

South Korea's foreign minister said on Friday there was nothing wrong with erecting a statue in memory of women forced to work in Japanese brothels in World War Two, but its location outside a Japanese consulate was inappropriate.

The statue of the young "comfort woman" in the southern city of Busan has rekindled a feud over wartime history between South Korea and its past colonial ruler and prompted Japan to temporarily recall its ambassador.

The term "comfort women" is a euphemism for girls and women, from South Korea, China, the Philippines and elsewhere, forced to work in Japanese military brothels.

South Korean activists estimate that there may have been as many as 200,000 Korean victims.

"The issue of a girl statue in Busan is unfortunate," Foreign Minister Yun Byung-se told lawmakers, referring to the southern city.

"Our government is not against the instalment of a girl statue... but I think we need to pool our wisdom on the issue of location."

He did not say if the statue would be moved.

The statue, which depicts a barefoot girl sitting in a chair, was erected near the Japanese consulate at the end of last year.

Japan said the statue violated an agreement to resolve the issue.

South Korean politicians, including expected presidential contenders, have called for renegotiation of the December 2015 agreement stating the comfort women issue would be "irreversibly resolved" if all conditions - including a Japanese apology and a fund to help the victims - were met.