Christians in Muslim-majority Malaysia can use 'Allah' in publications 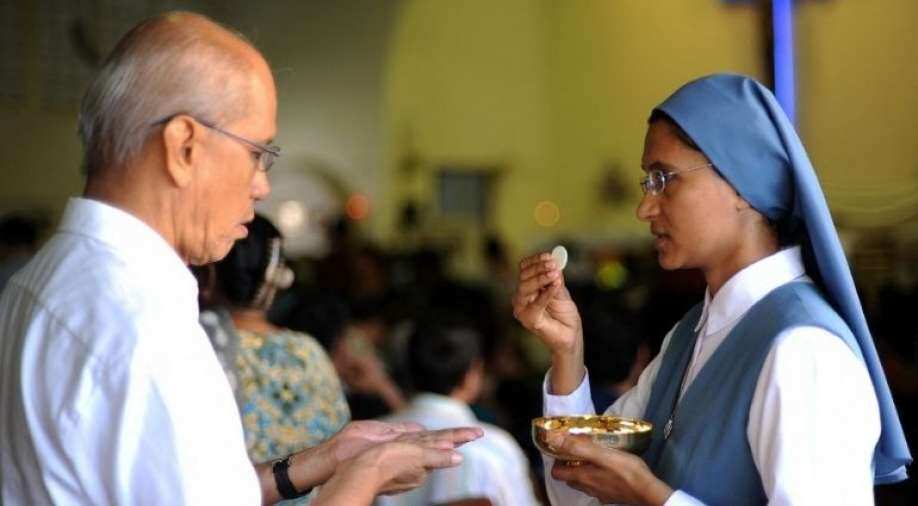 Malaysian Christians participate in the communion rite at a Sunday service inside a church in Petaling Jaya near Kuala Lumpur Photograph:( AFP )

The Arabic word for God has long been divisive in Malaysia, with Christians complaining attempts to stop them using it to highlight creeping Islamisation

A Malaysian court on Wednesday ruled that Christians in Muslim-majority Malaysia can use the word "Allah" in publications, a court ruled Wednesday, overturning a decades-old ban after a lengthy legal battle that fuelled religious tensions.

The Arabic word for God has long been divisive in Malaysia, with Christians complaining attempts to stop them using it to highlight creeping Islamisation. But some Muslims accuse Christians of overstepping boundaries.

Wednesday's case began 13 years ago when officials seized religious materials in the local Malay language from a Christian woman at Kuala Lumpur airport that contained the word "Allah".

Jill Ireland Lawrence Bill, a member of an indigenous group then launched a legal challenge against a 1986 ban on Christians using the term in publications.

After repeated delays, the Kuala Lumpur High Court finally sided with her, ruling she had the right not to face discrimination on the grounds of her faith.

According to the judge's lawyer, Annou Xavier, the ban on Christians using "Allah" was "unlawful and unconstitutional".

Christians in Malaysia say they have used the word "Allah" for centuries.

But authorities had argued against using the term in non-Muslim literature, saying it could confuse Muslims and entice them to convert.

In another high-profile case in 2014, Malaysia's top court dismissed a bid by the Catholic Church for the right to use the word "Allah" in the Malay-language edition of a church newspaper.

Malaysia has largely avoided overt religious conflict in recent decades, but tensions have been growing.

In 2014 a church was hit with petrol bombs, while Islamic authorities have seized Bibles containing the word "Allah".

In 2017 a Christian pastor was dragged from his car by masked men and kidnapped. He is still missing, with a public inquiry concluding he was probably snatched by "agents of the state".

Less than 10 per cent of Malaysia's 32 million people are estimated to be Christians, coming from mostly ethnic Chinese, Indian or indigenous backgrounds, while 60 per cent are Muslim ethnic Malay.