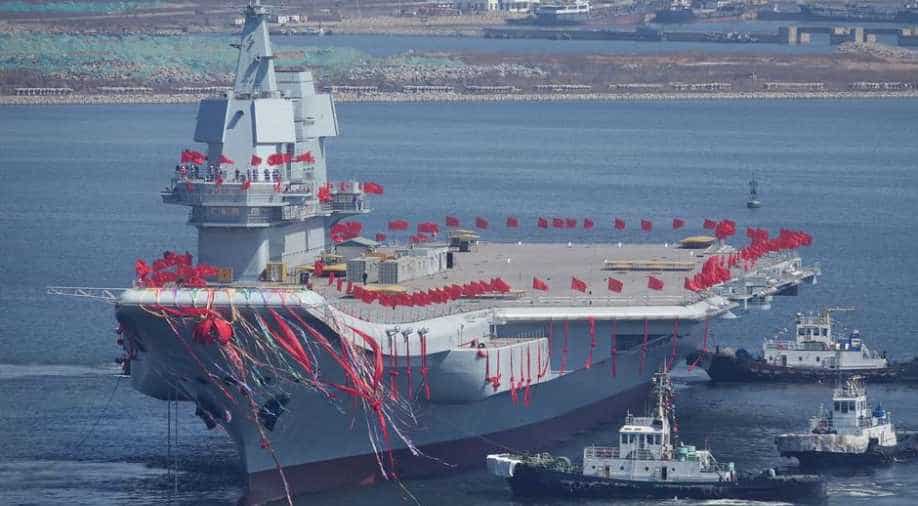 The ship named Shandong is carrying out sea trials as per an annual plan that includes training subjects, Defence spokesman Senior Colonel Ren Guoqiang was quoted as saying by the official media on Friday.

China's second aircraft carrier, which is the country's first domestically-built carrier, is conducting sea trials and training to test its equipment and weapons, the Chinese military said.

The ship named Shandong is carrying out sea trials as per an annual plan that includes training subjects, Defence spokesman Senior Colonel Ren Guoqiang was quoted as saying by the official media on Friday.

Ren said the training is aimed at testing the performance of the aircraft carrier's weapons and equipment, improving the training level of such warships and honing the capabilities of personnel to fulfil missions.

The ship has been actively conducting real combat-oriented training since its commissioning in December 2019.

"Troops on the aircraft carrier need to form independent comprehensive combat capability and integrate into the combat group system as soon as possible," Li Yongxuan, executive officer of the Shandong, said on CCTV news.

"We will do our best to make our aircraft carrier capable of fight and win," Li said.

The Shandong was commissioned by the People's Liberation Army Navy on December 17 at a naval base in Sanya in south China's Hainan province, after which it sailed back to the Dalian shipyard in late December for maintenance.

China currently has one aircraft carrier, Liaoning, a refit of the Soviet-era ship which was commissioned in 2012. It is being largely used for training especially to test the carrier fighter jet J-15 which has been specifically developed to operate from the decks of the aircraft carriers.

Official media reports said Shandong with a displacement of around 40,000-60,000 tonnes is bigger than Liaoning and could house 36 fighter jets compared to 24 by Liaoning besides helicopters.

Even while Shandong is undergoing sea trials, official media reports say China is building a third carrier which is projected to be even bigger with a displacement of 80,000 tonnes.

China plans to acquire about five to six aircraft carriers in the coming years, according to reports in the official media.

Beijing-based naval expert Li Jie told the paper that the training mission of Shandong will likely test if every adjustment is working well, noting that it is now laying the foundation for forming initial operational capability.

As it built more aircraft carriers, China, which already has a base at Djibouti in the Indian Ocean, is stepping up its presence in India's backyard.

China has acquired the Hambantota port in Sri Lanka as a debt swap for 99 years though Sri Lankan officials say it will not be used for military purposes.

China is also developing the strategically-located Gwadar port in Pakistan.

In a major rejig of its military doctrine, China since 2013 stepped up the development of the navy with massive budget. It included building several aircraft carriers besides submarines, frigates and assault ships as part of its efforts to expand its global influence.

China's this year's defence budget will be around 1.27 trillion yuan (about USD 179 billion) against last year's 177.61 billion. It was approved by the just-concluded session of legislature, the National People's Congress.

Shandong would be deployed in the South China Sea, an earlier report in the Global Times said.

According to the Chinese naval officials, Shandong's presence in the South China Sea could be a deterrent for repeated forays by the US naval ships to assert freedom of navigation in the area.

China claims almost all of the South China Sea. However, Vietnam, the Philippines, Malaysia, Brunei and Taiwan have counter claims.

Shandong's commissioning marked China's entry into an age of double carriers. It will enrich the Navy's tactical and strategic choices in time, space and sheer power, the daily quoted Chinese experts as saying.