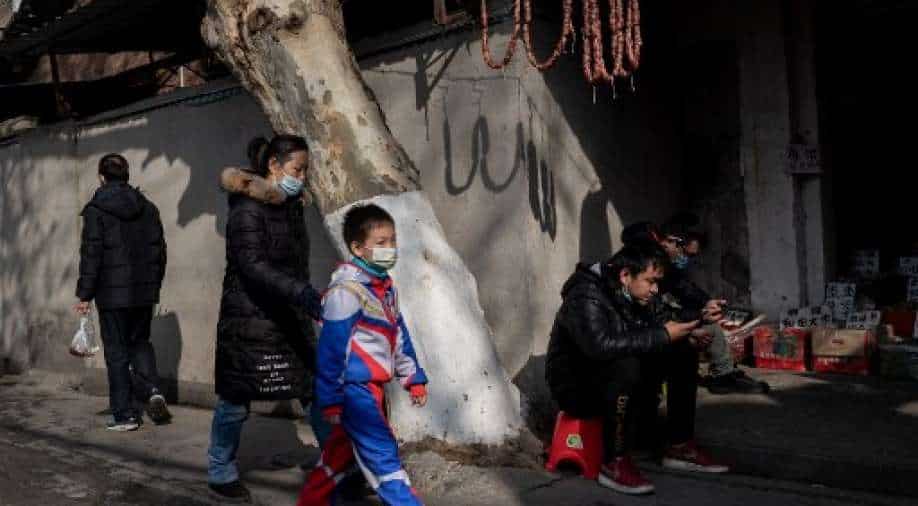 A woman and a boy wearing face masks walk on a street in Wuhan Photograph:( AFP )

Wuhan, in the central province of Hubei, is believed to be the epicentre of the global pandemic that has infected nearly 100 million people and killed over two million so far

Exactly one year after it thrust the word "lockdown" into the global conversation, Wuhan passed the anniversary with a mix of pride at emerging from Covid-19's grip and caution over a possible relapse.

Wuhan, in the central province of Hubei, is believed to be the epicentre of the global pandemic that has infected nearly 100 million people and killed over two million so far.

A year ago Saturday, Wuhan shocked the world by confining its 11 million anxious citizens to their homes, beginning a traumatic 76-day lockdown that underscored the growing threat of a mysterious pathogen emanating from the city.

One by one, adjacent areas in hard-hit Hubei province quickly followed suit, as did governments worldwide as the coronavirus went global.

But while the world's pandemic struggles continue, Wuhan today is nothing like the locked-down ghost town of a year ago, with traffic humming, sidewalks bustling, and citizens packing public transport and parks.

However, memories of Wuhan's ordeal remain fresh, especially as localised Covid-19 clusters multiply across China, prompting mass testing in Beijing and targeted lockdowns in other areas.

The virus has killed at least two million people globally and continues to rage, but in China authorities have reported fewer than 5,000 deaths, the vast majority coming in Wuhan at the pandemic's outset.

Beijing has sought to control the narrative around the outbreak by silencing critics. Dozens of laudatory documentaries have been released by local propaganda authorities and government-backed media on China's COVID-19 outbreak, evoking wartime analogies to describe the actions of medical workers and policymakers, including President Xi Jinping.

There was an outpouring of public grief and anger in February 2020 following the COVID-19-linked death of a Chinese doctor who had been reprimanded for issuing an early warning about the disease.

In December, a Chinese court jailed citizen journalist Zhang Zhan for four years for sharing her own series of first-hand accounts from Wuhan's streets and hospitals.

Brazil investigates reports of vaccines being exchanged for illegal gold