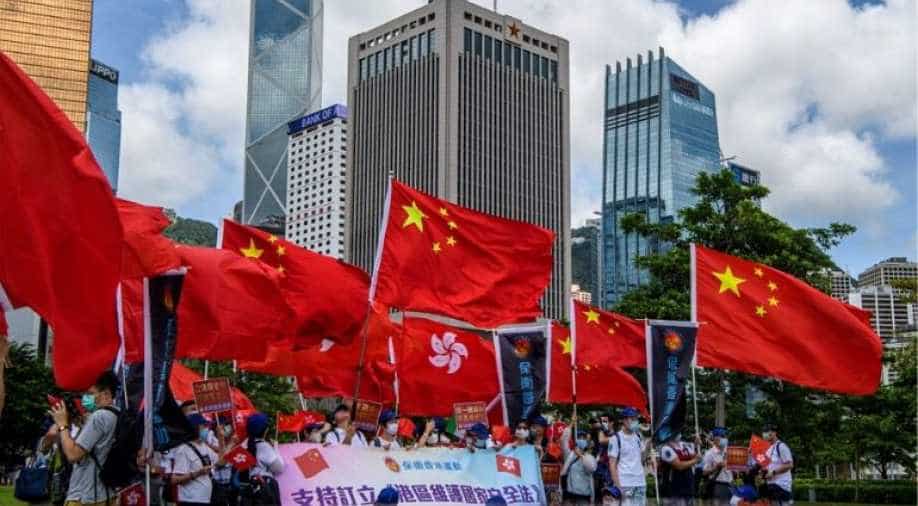 Pro-China supporters display Chinese and Hong Kong flags during a rally near the government headquarters in Hong Kong on June 30, 2020, as China passed a sweeping national security law for the city. Photograph:( AFP )

Australia offered pathways to permanent residency for thousands of people from Hong Kong on Thursday in response to China's crackdown on dissent, drawing a furious reply from Beijing.

China has shot back on Australia's offer of safe haven to Hong Kongers, condemning the announcement as violations of "fundamental principles of international relations".

Australia offered pathways to permanent residency for thousands of people from Hong Kong on Thursday in response to China's crackdown on dissent, drawing a furious reply from Beijing.

Prime Minister Scott Morrison said his government was suspending its extradition agreement with the city and, in addition to extending the visas of 10,000 Hong Kongers already in the country, threw open the door to thousands more wanting to start a new life Down Under.

Morrison said the decisions were taken in response to China's imposition last week of a tough new security law in Hong Kong, which he said "constitutes a fundamental change of circumstances" for the semi-autonomous territory.

To this end, Chinese foreign ministry spokesman Zhao Lijian warned: "China... reserves the right to take further reactions, all consequences will be borne by Australia."

"Any attempts to suppress China will never succeed."

The new law, which followed sometimes-violent pro-democracy protests, is the most radical change in Hong Kong's freedoms since Britain handed the city back to China in 1997 under an agreement designed to preserve its way of life for 50 years.

China has bristled at widespread global criticism of the law.

Beijing in recent months has imposed tariffs on some Australian imports and impeded trade in other key commodities in response to Australian steps to counter Chinese interference in the country.

China, Australia's biggest trade partner and a competitor for influence in the Pacific, was notably infuriated when Canberra led calls for a probe into the origins of the coronavirus pandemic.

New Zealand is also reviewing its relationship with Hong Kong because of the new law, Foreign Minister Winston Peters said Thursday, "including extradition arrangements, controls on exports of strategic goods, and travel advice".

Canada has also suspended its extradition treaty with Hong Kong, while the British government has offered more than three million Hong Kongers a broader path to citizenship.