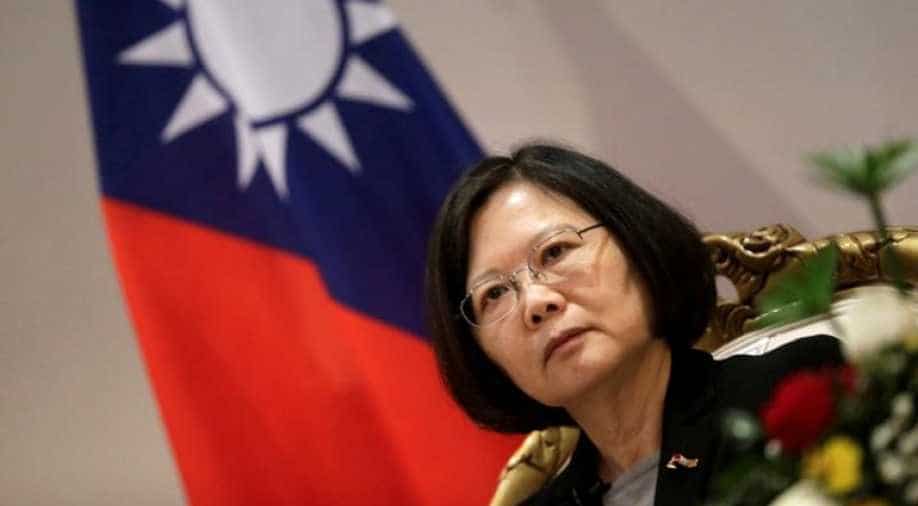 China is suspicious of Tsai, whom it thinks wants to push for Taiwan's formal independence. Photograph:( Reuters )

China called on US officials on Tuesday not to let Taiwanese President Tsai Ing-wen pass through the United States en route to Guatemala next month, days after President-elect Donald Trump irked Beijing by speaking to Tsai in a break with decades of precedent.

The US State Department appeared to reject the call, saying that such transits were based on "long-standing US practice, consistent with the unofficial nature of (US) relations with Taiwan".

China is deeply suspicious of Tsai, whom it thinks wants to push for the formal independence of Taiwan, a self-governing island that Beijing regards as a renegade province.

Her call with Trump on Friday was the first between a US president-elect or president and a Taiwanese leader since President Jimmy Carter switched diplomatic recognition to China from Taiwan in 1979.

Tsai is due to visit Guatemala, one of Taiwan's small band of diplomatic allies, on January 11-12, its foreign minister, Carlos Raul Morales, told Reuters.

Taiwan's Liberty Times, considered close to Tsai's ruling Democratic Progressive Party, reported on Monday that she was planning to go through New York early next month on her way to Nicaragua, Guatemala and El Salvador.

Taiwan has not formally confirmed Tsai's trip but visits to its allies in the region are normally combined with transit stops in the United States and meetings with Taiwan-friendly officials.

The trip would take place before Trump is inaugurated on January 20 to replace Democrat Barack Obama and Tsai's delegation would seek to meet Trump's team, including his White House chief of staff Reince Priebus, the Liberty Times said.

An adviser to Trump's transition team said he considered it "very unlikely" there would be a meeting between Tsai and Trump if she were to go through New York.

China's Foreign Ministry said the one-China principle, which states Taiwan is part of China, was commonly recognised by the international community and that Tsai's real aim was "self-evident".

China hopes the United States "does not allow her transit, and does not send any wrong signals to 'Taiwan independence' forces," the ministry said in a statement sent to Reuters.

US State Department spokesman Mark Toner said on Monday he had no information whether Tsai would meet US officials if she stopped in transit but said Taiwanese presidents did stop over periodically.

He said the transits were "based on long-standing US practice, consistent with the unofficial nature of our relations with Taiwan." A spokeswoman repeated the position on Tuesday when asked to comment on the Chinese call.

In a meeting with American reporters on Tuesday, Tsai played down the significance of her conversation with Trump, saying it was to congratulate the president-elect.

"I do not foresee major policy shifts in the near future because we all see the value of stability in the region," she told the reporters.

US vice president-elect Mike Pence told the Fox News Channel on Tuesday that Trump did not regret taking the call.

"(The) president-elect was fully aware of the one-China policy," Pence said. "He’s also very aware that the United States has sold billions of dollars in arms to Taiwan. We have a unique relationship with that country that’s been defined over the decades since we’ve reopened relations with the People’s Republic of China but I think he think he felt it would be rude not to take the call.”

Taiwan has been self governing since 1949 when Nationalist forces fled to the island after defeat by Mao Zedong's communists in China's civil war. Taiwan's Presidential Office said media reports about a January trip were "excessive speculation".

El Salvador's government said it was working with Taiwan on plans for a visit by Tsai in the second week of January but gave no specific dates.

The Nicaraguan government had no immediate comment. Nicaraguan President Daniel Ortega is to be sworn in for a third consecutive term on January 10, however, so Tsai's trip to Guatemala would dovetail with that ceremony.

The White House said on Monday it had sought to reassure China after Trump's phone call with Tsai, which the Obama administration warned could undermine progress in relations with Beijing.