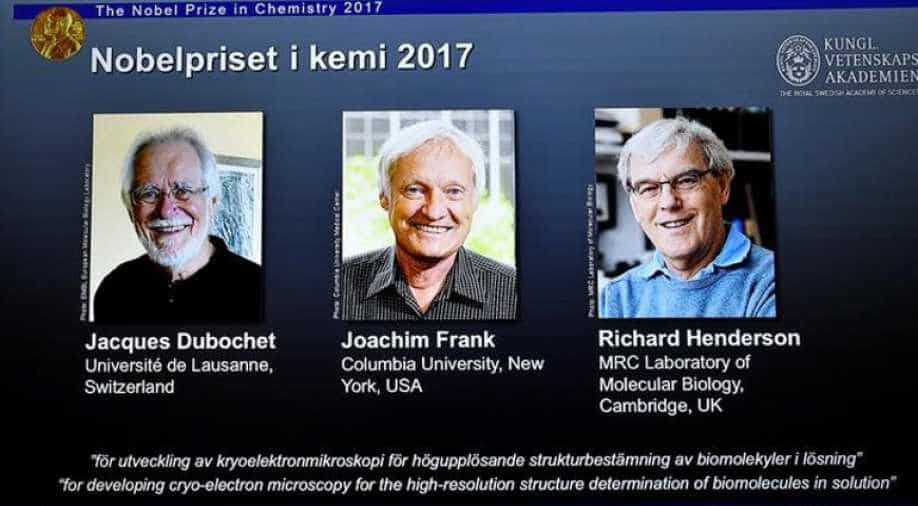 Dubochet is Swiss, Frank and Henderson are from the US and UK respectively.? Photograph:( Reuters )

A revolutionary technique dubbed cryo-electron microscopy, which has shed light on the Zika virus and an Alzheimer's enzyme earned scientists Jacques Dubochet, Joachim Frank and Richard Henderson the Nobel Chemistry Prize on Wednesday.

Thanks to the international team's "cool method", which uses electron beams to examine the tiniest structures of cells, "researchers can now freeze biomolecules mid-movement and visualise processes they have never previously seen," the Nobel chemistry committee said.

This has been "decisive for both the basic understanding of life's chemistry and for the development of pharmaceuticals," it added.

The ultra-sensitive imaging method allows molecules to be flash-frozen and studied in their natural form, without the need for dyes.

It has laid bare never-before-seen details of the tiny protein machines that run all cells.

"When researchers began to suspect that the Zika virus was causing the epidemic of brain-damaged newborns in Brazil, they turned to cryo-EM (electron microscopy) to visualise the virus," the committee said.

Frank, a 77-year-old, German-born biochemistry professor at Columbia University in New York, was woken from his sleep when the committee announced the prize in Stockholm, six hours ahead.

"There are so many other discoveries every day, I was in a way speechless," he said. "It's wonderful news."

In the first half of the 20th century, biomolecule, proteins, DNA and RNA, were terra incognita on the map of biochemistry.

Because the powerful electron beam destroys biological material, electron microscopes were long thought to be useful only to study the dead matter.

But 72-year-old Henderson, from the MRC Laboratory of Molecular Biology in Cambridge, used an electron microscope in 1990 to generate a three-dimensional image of a protein at atomic resolution, a groundbreaking discovery which proved the technology's potential.

Frank made it widely usable between 1975 and 1986, developing a method to transform the electron microscope's fuzzy two-dimensional images into sharp, 3-D composites.

Dubochet, today an honorary professor of biophysics at the University of Lausanne, added water.

Now 75, he discovered in the 1980s how to cool water so quickly that it solidifies in liquid form around a biological sample, allowing the molecules to retain their natural shape even in a vacuum.

The electron microscope's every nut and bolt have been optimised since these discoveries.

The required atomic resolution was reached in 2013, and researchers "can now routinely produce three-dimensional structures of biomolecules," according to the Nobel committee.

The trio will share the prize money of nine million Swedish kronor (around $1.1 million or 943,100 euros).

"Normally what I'd do if I was in Cambridge, we will have a party around tea-time in the lab but I expect we'll have it tomorrow instead," said Henderson.

The prize announcement was praised by the scientific community and observers around the world.

"By solving more and more structures at the atomic level we can answer biological questions, such as how drugs get into cells, that were simply unanswerable a few years ago," Jim Smith, science director at the London-based biomedical research charity Wellcome, said in a statement.

Daniel Davis, immunology professor at the University of Manchester, said details of crucial molecules and proteins that make the human immune system function, can now be seen like never before.

"It has been used in visualising the way in which antibodies can work to stop viruses being dangerous, leading to new ideas for medicines –- as just one example," he said.

It has been used, for example, to compile a detailed identikit of an enzyme implicated in Alzheimer's.

"Knowing this structure opens up the possibility of rational drug design in this area," Hardy said.

"And as a biologist, I can say that the pictures are beautiful."