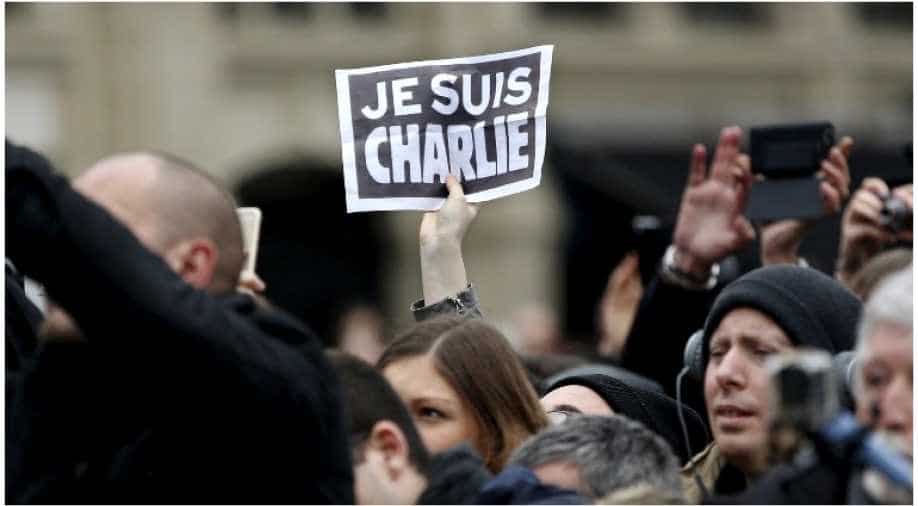 Image shows support Charlie Hebdo got in the aftermath of the terrorist attack in 2015 Photograph:( Reuters )

Fourteen defendants, three of whom will be tried in absentia and may be dead, face charges including financing terrorism, membership in a terrorist organisation and supplying weapons to the perpetrators: Said and Cherif Kouachi and Amedy Coulibaly.

The Islamist gunmen who struck the Charlie Hebdo magazine and a Jewish store, killing 17, are dead but on Wednesday, five years after the attack that marked the onset of a wave of Islamist violence in France, their alleged accomplices face trial.

Fourteen defendants, three of whom will be tried in absentia and may be dead, face charges including financing terrorism, membership in a terrorist organisation and supplying weapons to the perpetrators: Said and Cherif Kouachi and Amedy Coulibaly.

On Jan. 7, 2015, the Kouachi brothers went on a killing spree in the Paris offices of Charlie Hebdo, whose satire on race, religion and politics tested the limits of what society would accept in the name of free speech.

They killed 12 in an attack claimed by al Qaeda.

The following day, Coulibaly, an acquaintance of Cherif Kouachi, killed a female police officer. On Jan. 9, he killed four Jewish men at a kosher supermarket. In a video, he said he acted in the name of Islamic State.
More than 250 people have been killed in France in Islamist violence since the attacks and countering the threat remains a government priority, Interior Minister Gerald Darmanin says.

Also Read: We have freedom of the press, says Macron on Charlie Hebdo row

Al Qaeda`s Yemen branch placed Charlie Hebdo`s then-director on its "wanted list" after the weekly published caricatures of the Prophet Mohammad, including one of him in a bomb-shaped turban.

The magazine plans to re-publish the cartoons to coincide with the trial.

President Emmanuel Macron said it was not for him to pass comment on the magazine`s editorial judgement and that the freedom to blaspheme went in hand in hand with the freedom of belief in France.

"Satire is not a discourse of hate," the president told a news conference in Beirut.

Among those charged are Hayat Boumedienne, Coulibaly`s partner at the time of the attacks, and brothers Mohamed and Mehdi Belhoucine. All three travelled to areas of Syria under Islamic State`s control days before the attacks and may be dead.

The trial, which will run for 10 weeks and be filmed throughout, is likely to evoke painful memories.

"He literally died with his felt-tip in his hand," she told RTL radio. "He never let go."