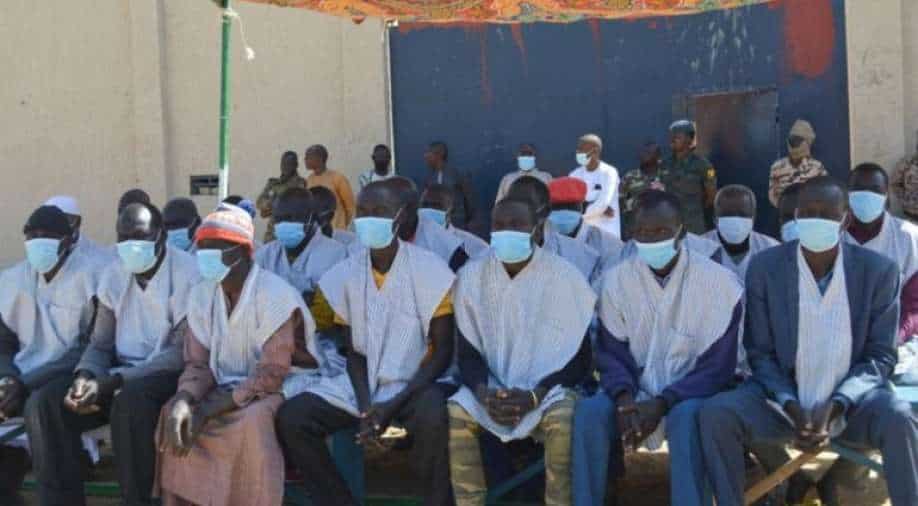 Twenty-two prisoners attend their release ceremony marking the beginning of the release of around two hundred and fifty members of rebel groups and other prisoners of war, at Klessoum prison in N'Djamena, Chad. Photograph:( AFP )

Deby took over as head of a Transitional Military Council (TMC) in the poor landlocked central African country after his father, Idriss Deby Itno, who had ruled Chad for three decades, was killed in fighting with rebels in April last year

Talks between Chad's military-led government and armed rebel groups due to start Sunday in Qatar have been postponed, African diplomats and officials said.

The talks are aimed at paving the way for an "inclusive national dialogue" and elections which the leader of the Chadian junta Mahamat Idriss Deby Itno has promised by October.

Deby took over as head of a Transitional Military Council (TMC) in the poor landlocked central African country after his father, Idriss Deby Itno, who had ruled Chad for three decades, was killed in fighting with rebels in April last year.

African diplomats in Doha said Sunday's talks in Qatar had been delayed because preparations for the meeting had not been completed.

"Some delegations are here. The talks did not start today but could start in coming days," a source with knowledge of the meeting told AFP on condition of anonymity as no-one was authorised to speak publicly.

Chadian sources close to the negotiations told AFP in N'Djamena that the junta was insisting on inviting more than 80 members of the 23 armed rebel groups -- a request initially denied by Qatar.

Other sources, also speaking on condition of anonymity, blamed the delay on difficulties for would-be participants -- some of whom live in Libya or Sudan -- to obtain travel documents.

After taking power in last April, Deby, 37, dissolved Chad's parliament and repealed the constitution, but he promised "free and transparent" elections within 18 months.

However, a national forum designed to chart the country's future has been put back from February to May. Preliminary talks have also been held up several times amidst recriminations between the government and opposition.

Erdimi, who was one of the fiercest opponents of Deby's father, was contacted by AFP at the time but refused to comment on the allegation.

The African Union, European Union and France, the former colonial power, have supported the junta leader but insisted he must keep to his promised timetable to hold elections.