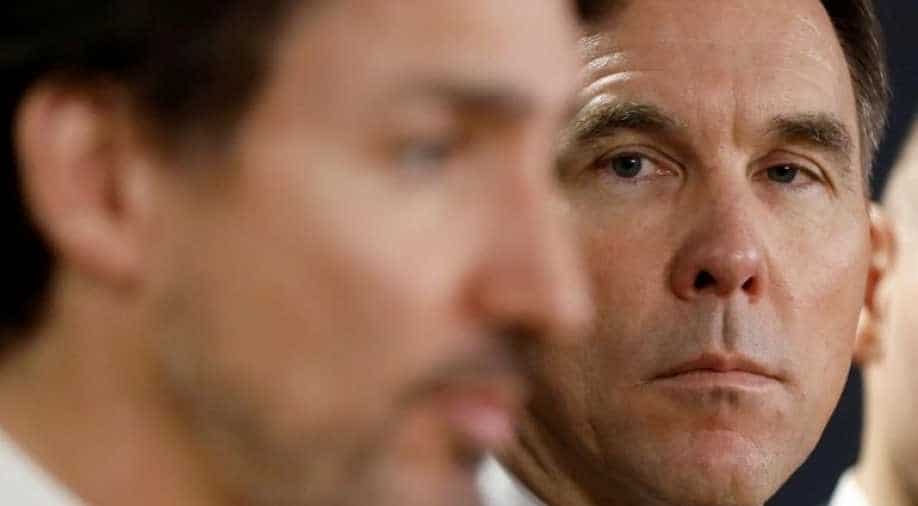 Canada's Finance Minister Bill Morneau has resigned amid controversies of charity scandal and fallout with the Canadian Prime Minister.

"This morning I went to the prime minister and I tendered my resignation," Morneau announced on Monday morning.

He claims the reason behind this decision is that he does not plan to run for the parliament again and would prefer if the PM Justin Trudeau finds someone for long term. "It`s appropriate that the prime minister find someone with a longer term approach for the role, since I`m not running for office," he said.

However, his reason is being seen as a cover-up for the real issues. Morneau, the 57-year-old minister, had been on this job since 2015. However, recently there had been rumours about his falling out with Trudeau, after which the PM had expressed confidence in his finance minister.

Morneau, who claims to aim to become the next secretary general of the Organisation for Economic Cooperation and Development (OECD) rather than the Finance Minister, was also surrounded by controversies of a charity scandal after he disclosed he had forgotten to repay travel expenses covered for him by a charity at the heart of an ethics probe. This upset several cabinet members and led to an investigation on Morneau and the PM from the Ethics body of the charity.

His decision to step down, when the country is facing economic challenges in a pandemic, has not been appreciated by the opposition. "I doubt you`ll be seeing other finance ministers around the world step down at this time of elevated economic and fiscal uncertainty," David Rosenberg, chief economist at Rosenberg Research and Associates. "It`s like a boxer being forced to take his gloves off in the fifth round."

The opposition has labelled this step-down as a proof of the government facing an inner chaos.

Conservative Party leader Andrew Scheer took to Twitter to condemn this resignation. Calling it a 'scapegoat' move, he claimed that the "government is so consumed by scandal that Trudeau has amputated his right hand to try and save himself."

Bill Morneau’s “resignation” is further proof of a government in chaos.

At a time when Canadians are worried about their health and their finances , Justin Trudeau’s government is so consumed by scandal that Trudeau has amputated his right hand to try and save himself. 1/3

"We had a little bit of a sell-the-rumour type weakness in the lead up to the resignation," said Ray Attrill, head of forex strategy at National Australia Bank in Sydney. "There doesn’t seem to be any suggestion at this stage that this any broader implications for the Canadian government."

Justin Trudeau, however, thanked the minister and his friend for his service over the past five years and assured that he will be lending his full support to Morneau in his bid to head the OECD.

While the resignation became a point of debate among the two political parties, the Canadian dollar showed little reaction to the news.