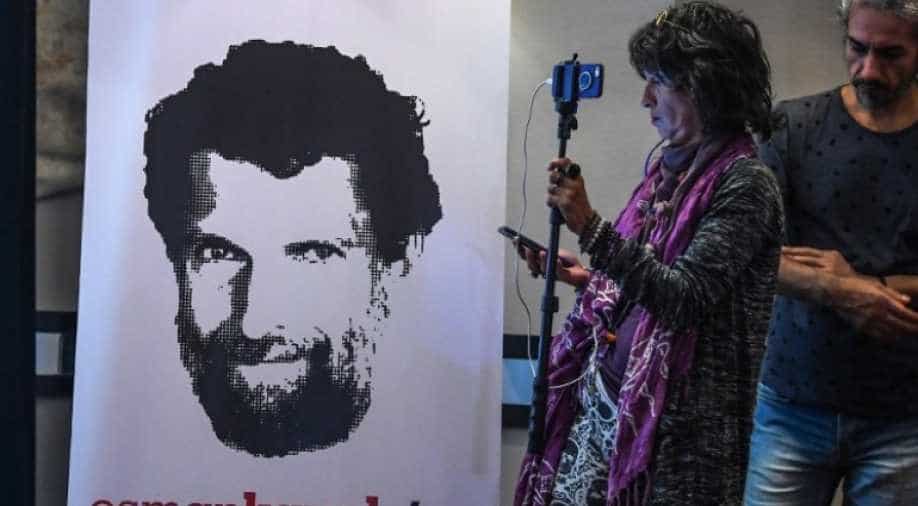 A journalist stands in front of a poster featuring jailed businessman and philanthropist Osman Kavala during a press conference of his lawyers. Photograph:( AFP )

The lawyers of imprisoned human rights activist and prominent businessman Osman Kavala called for his release on Wednesday, one year after he was detained as part of the purges that followed Turkey's 2016 failed coup.

Kavala, chairman of Anadolu Kultur (Anatolian Culture) which aims to overcome differences within Turkish society through culture and the arts, has still not been formally charged.

"A year after his detention, there is still no indictment," lawyer Ilkan Koyuncu said at a press conference in Istanbul. "We continue to call for (his) release."

The philanthropist and co-founder of the Iletisim publishing house, who is well-known among intellectual circles in Turkey and abroad, was arrested on October 18, 2017 before being remanded in custody on November 1.

He is being held in Silivri prison, near Istanbul, suspected of "attempting to remove the constitutional order" and "attempting to overthrow the government" by "force or violence".

According to his lawyers, Turkish authorities suspect him of having links to the attempted overthrow of President Recep Tayyip Erdogan on July 2016, as well as financing anti-government demonstrations during the Gezi protest movement in 2013.

"I want to regain my freedom and rejoin with my family and friends as soon as possible," Kavala said in a written message from prison read at the press conference.

He said he had "nothing to do" with the accusations levelled at him.

His lawyers condemned the slow pace of the process and the refusal of authorities to give them access to Kavala's case file.

"We are like Don Quixote tilting at windmills. We don't know what we have in front of us," said Koksal Bayraktar, a lawyer providing legal advice to Kavala.

"But behind all this, there is a concrete reality: one man, an intellectual, locked up for a year within four walls," he added.

Kavala's Anadolu Kultur NGO has sought to reach out to Armenia. Turkey has no relations with the country partly due to the dispute over the mass killings of Armenians under the Ottoman Empire, which Yerevan considers a genocide.

Kavala, who has urged the killings be recognised as genocide, is regularly compared by pro-government Turkish media to the liberal US billionaire George Soros.

Kavala was among more than 70,000 people arrested over alleged links to the plotters of the 2016 coup attempt, though some have since been released.