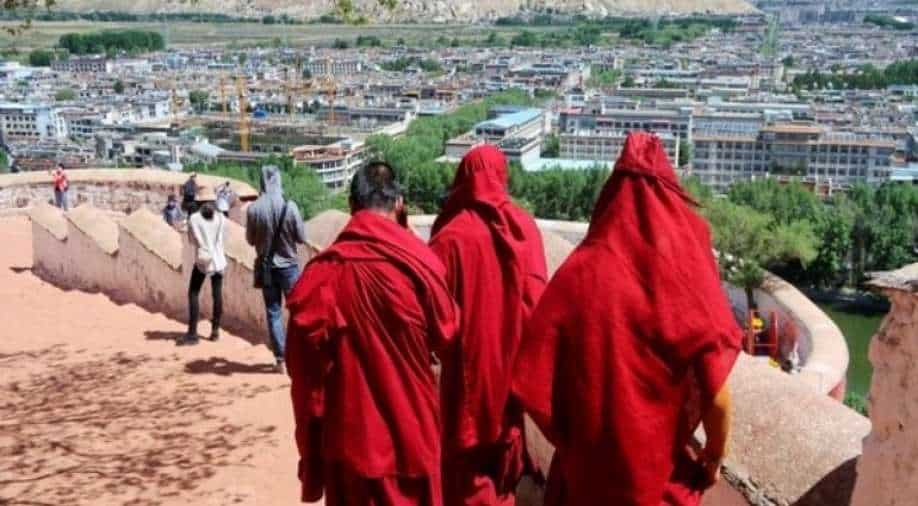 Tibetan Buddhist monks walk on the grounds of the Potala Palace overlooking the city of Lhasa, Tibet. Photograph:( ANI )

According to RFA, local monastery monks and other Tibetan people were forced to witness the damage, which experts described as part of a larger push to erase Tibet's unique national culture and religion.

Chinese officials in Sichuan province are arresting Tibetan monks and assaulting them on suspicion of informing outsiders about the destruction of a 99-foot tall Buddha monument in the country's Luhuo county (Drago).

According to Tibetan reports quoted by Radio Free Asia (RFA), the Buddha monument in the Kardze (Ganzi) Tibetan Autonomous Region was demolished in December by officials who said it was erected too high.

According to RFA, local monastery monks and other Tibetan people were forced to witness the damage, which experts described as part of a larger push to erase Tibet's unique national culture and religion.

According to RFA, 11 monks from Drago's Gaden Namgyal Ling monastery have been arrested on suspicion of disseminating news and images of the statue's demolition to connections outside the province.

"As of now, we have learned that Lhamo Yangkyi, Tsering Samdrup, and four other Tibetans have been arrested for communicating outside Tibet, " RFA quoted the source as saying," citing contacts in Drago.

According to the source, the statue was desecrated a few days prior, and Abbot Pelga, his aide Nyima, and the monks Tashi Dorje and Nyima from the Drago monastery were apprehended.

According to the source, Chinese officials have stated that they need to be taught a lesson.

He further said that the officers abused the monks and denied them food while they were imprisoned.

They mercilessly beaten one of the monks, severely injuring one of his eyes.

Following the arrest of monks for spreading word of monument removal, Sophie Richardson, China director for Human Rights Watch in New York, stated that religious believers in China cannot rely on legal or constitutional guarantees to protect their beliefs.

Richardson also said that Beijing in its current phase of "ultranationalist and statist ideology gives all power to the state, and regards civil society with suspicion and contempt, according to RFA.