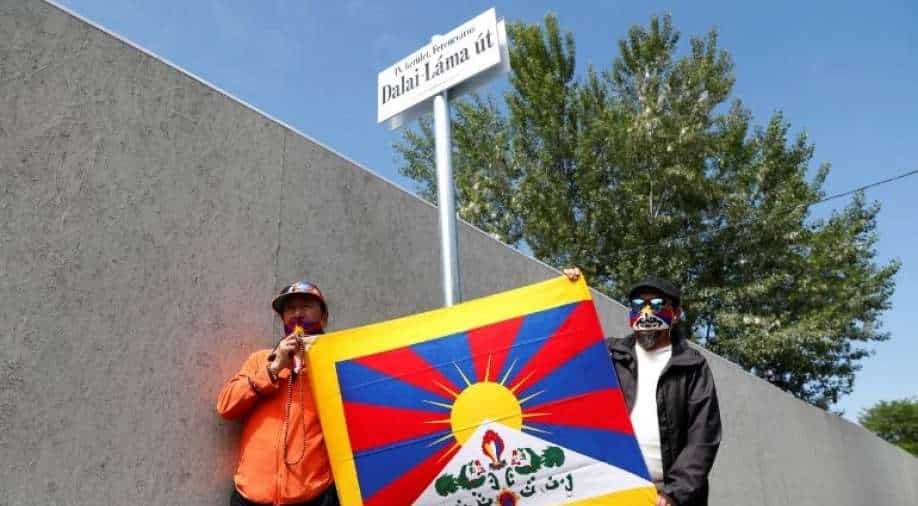 Activists hold a Tibetan flag next to a sign in a street renamed 'Dalai Lama', near the planned site of Chinese Fudan University campus, in Budapest, Hungary, June 2, 2021 Photograph:( Reuters )

"This Fudan project would put in doubt many of the values that Hungary committed itself to 30 years ago”, said Mayor Gergely Karacsony, referring to the fall of Communism in the country

The mayor of Budapest on Wednesday announced plans to rename streets in the Hungarian capital near the location of a planned Chinese university’s campus to commemorate alleged human rights abuses committed by Beijing.

Reported first by Reuters, the mayor will name a street after the Dalai Lama, the exiled leader of Tibet who has been labelled a separatist by Beijing. Another street will be renamed “Uyghur Martyrs’ Road” after the Muslim ethnic group reportedly facing genocide in the Chinese territory of Xinjiang.

While international players have accused China of human rights excesses, the country’s officials have denied any attempts to repress human rights.

The streets which have been renamed will intersect at an area where Fudan University from China is planning to open a campus offering programmes in medicine, liberal arts, business and engineering for 6,000 students and 500 faculty members.

"This Fudan project would put in doubt many of the values that Hungary committed itself to 30 years ago”, said Mayor Gergely Karacsony, referring to the fall of Communism in the country. Karacsony, a liberal politician from the opposition party will run against Viktor Orban, the country’s right-wing prime minister next year.

In conversation with reporters, Karacsony said that the Chinese campus would cost Hungarian taxpayers nearly $2 billion.

The government has defended the project, referring to the presence of Fudan University as an opportunity to “learn from the best in the world”.