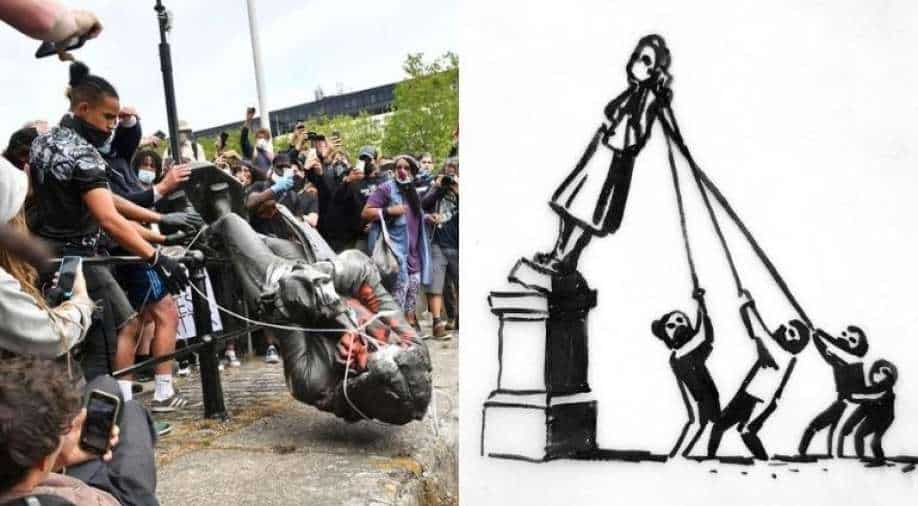 Statue of Edward Colston being toppled by protesters (L) in the aftermath of protests against the death of George Floyd who died in police custody in Minneapolis along with an illustration of the same by Banksy Photograph:( Agencies )

British street artist Banksy has designed T-shirts to help protesters facing trial over the removal of a slave trader statue.

He took to Instagram and wrote "People of colour are being failed by the system. The white system."

"Like a broken pipe flooding the apartment of the people living downstairs. This faulty system is making their life a misery, but it's not their job to fix it.... this is a white problem."

He called the T-shirts his souvenir to "mark the occasion" of the trial of the people who toppled the statue of Edward Colston.

They cost £25 ($33) and will be available in several outlets of Bristol.

Anti-racism protesters who tore down a statue honouring a slave trader in a British port city have fuelled a hot global debate over how to deal with monuments to historic figures who profited from enslaving African people.

Also read | Say what? Christopher Walken painted over a real Banksy piece for a TV show

The toppling of the statue of Edward Colston, who made a fortune in the 17th century from trading in West African slaves, was condemned as petty vandalism by critics, while others hailed it as affirmative action against racist ideologies.

"It was an absolutely incredible feat that really shows the importance of us knowing our history," said Aliyah Hasinah, a curator and spokeswoman for protest group Black Lives Matter UK.

"Public art absolutely has an impact on our imagination and what we believe is at the core of our society because it's what we hail as important," she said.

"That's why so many people politely petitioned to get the Colston statue removed ... They weren't listened to, so the city of Bristol made their voices heard in another way."

Colston's statue was pulled down by protesters joining a wave of worldwide demonstrations against racial inequality triggered by the death of unarmed black man George Floyd at the hands of US police.

But the debate over building and monuments named after people involved in the trans-Atlantic slave trade has been brewing for some years fuelled by the world's recently adopted drive to end modern slavery.

Campaigners had previously called for the statue, still bearing a plaque describing Colston as "virtuous and wise," to be removed, but had failed to persuade the authorities.