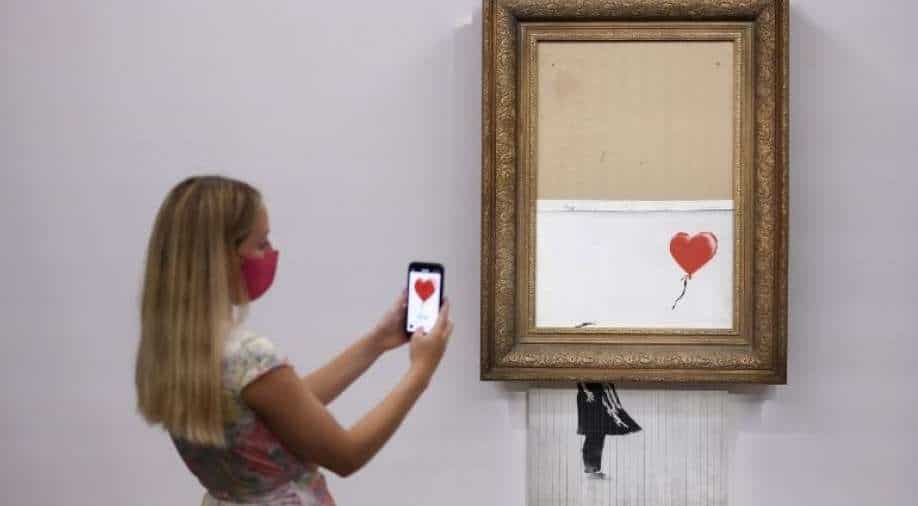 A gallery assistant poses by 'Love is in the Bin', an artwork by Banksy, for sale in an auction, at Sotheby's in London, Britain Photograph:( Reuters )

Banksy has become the most famous street artist in Britain. His painting "Game Changer" was sold in London's Christie auction house for a whooping £14.4 million

British street artist Banksy's half-shredded picture called 'Love is in the Bin' has been sold for a record $25 million (£18.6 million).

The price of the picture was estimated at 4.6 million pounds but ended up fetching thrice its price.

Auction house Sotheby's said the picture belongs to the anti-art category which was made famous by Marcel Duchamp's 'Fountain.'

It put on a dramatic show which was actually a surreal prank when they shredded the picture previously called 'Girl with the Balloon.'

Auctioneer Oliver Barker joked "I can't tell you how terrified I am to bring down this hammer.''

Sotheby's chairman of contemporary and modern art Alex Branczik said ''When Girl with Balloon 'self-destructed' in our saleroom, Banksy sparked a global sensation that has since become a cultural phenomenon.''

''He is no stranger to making headlines and this latest chapter in his story has captured imaginations across the world, we can only begin to guess what might come next," Branczik added.

Banksy has become the most famous street artist in Britain. His painting "Game Changer" was sold in London's Christie auction house for a whooping £14.4 million.

He gave a tribute to the frontline workers in the United Kingdom and donated the proceeds of his artwork to the National Health Service (NHS).

He gained fame after confirming that releasing an Instagram video entitled "A Great British Spraycation" in which he confirmed that his creations were painted across the country.