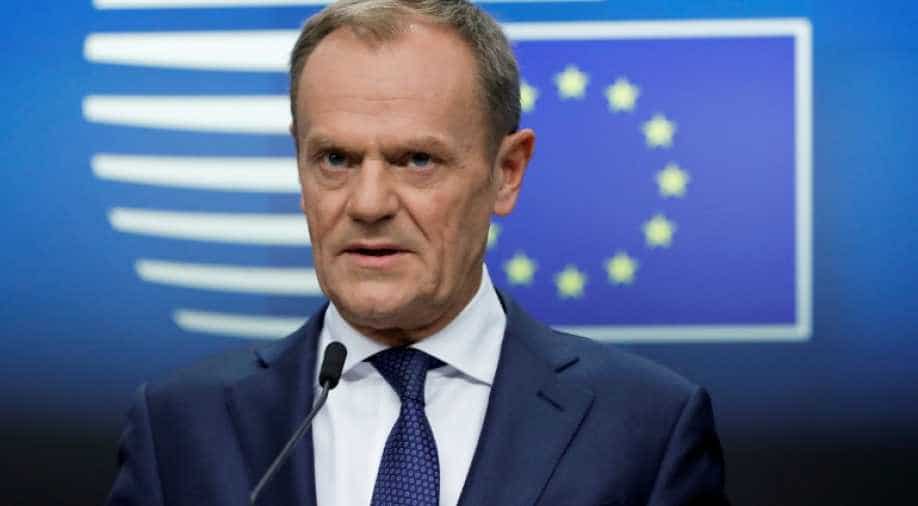 Tusk said only a united Europe could confront an assertive China and play an effective global role.

Britain will lose influence in international affairs and become a "second-rate player" after it leaves the European Union, European Council President Donald Tusk said on Wednesday.

Backers of Britain's 2016 vote to exit the EU, the world's largest trading bloc, say that the country - the world's fifth-largest economy - will achieve a new global status unshackled from EU rules and closer to the United States.

Tusk said only a united Europe could confront an assertive China and play an effective global role.

"I have heard repeatedly from Brexiteers that they wanted to leave the European Union to make the United Kingdom global again, believing that only alone, it can truly be great...," Tusk said in a speech at the College of Europe in the Belgian city of Bruges.

"But the reality is exactly the opposite. Only as part of a united Europe can the UK play a global role, only together can we confront, without any complexes, the greatest powers of this world. And the world knows it," said Tusk, who has chaired EU summits for the past five years and been an influential voice in European politics.

"I have heard the same in India, New Zealand, Australia, Canada and South Africa - that after its departure, the UK will become an outsider, a second-rate player."

Tusk has repeatedly voiced a wish for Britain to change its mind and stay in the EU. The former Polish prime minister will step down from his post on December 1, handing over to former Belgian prime minister Charles Michel

Britain is set to leave the bloc on January 31, 2020, if British Prime Minister Boris Johnson wins a majority in next month's election and thereby secures parliamentary ratification of his EU withdrawal deal.

But Britain's status as an influential power in the EU has also given it clout to diverge from Washington when it disagrees - something it has frequently done since US President Donald Trump came to office.

Many Western diplomats believe Britain after Brexit must be careful not alienate itself from other friendly countries who have a more multilateral approach to world politics than Trump.

"'Why are they doing this?' – I was asked this regretful question everywhere I went,", Tusk said. "One of my English friends is probably right when he says with melancholy that Brexit is the real end of the British Empire."