Bomb defused near US embassy in Philippines: Police 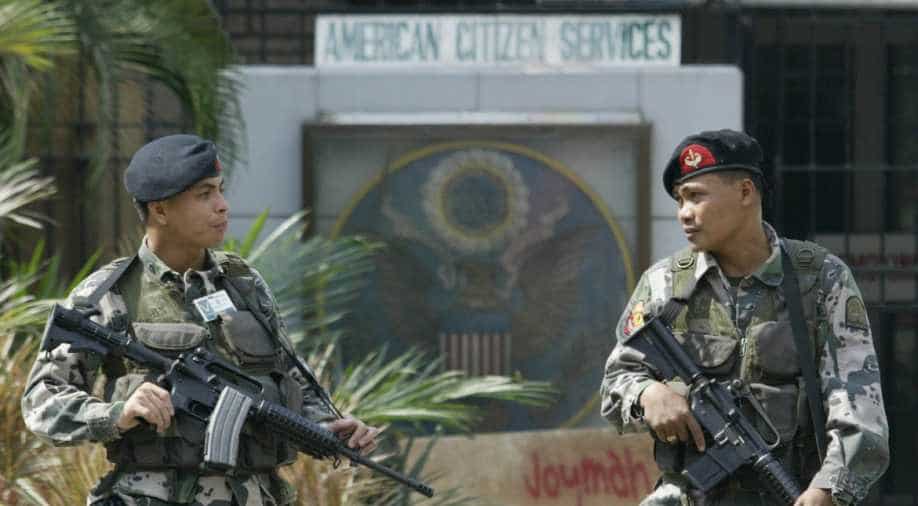 Filipino elite police secure the perimeter of the US embassy in Manila, Philippines November 30, 2002 as Anti-US protesters held a rally nearby. Photograph:( Getty )

Philippine police conducted a controlled detonation of a home-made bomb found in a trash bin near the US embassy in Manila on Monday and said militants sympathetic to Islamic State could have been responsible.

National police chief Ronald dela Rosa said components of the improvised explosive device suggested it could have been planted by the Maute, a Muslim rebel group that has pledged allegiance to Islamic State. Maute's fighters were locked in a standoff with the military for a third day in the country's south. More rebels were reported killed on Monday, taking the number of dead to 19.

"We could theorise that they could use this as a diversion," dela Rosa told a news conference. The embassy had no immediate comment on the discovery of the bomb, which was left about 200 metres from the compound. Business there continued as normal, with dozens of Filipinos queuing outside for visa applications.

An 81 millimetre mortar round was used as an explosive device and that was a signature of the group, Dela Rosa said. Similar components were used in a September 2 bombing in Davao, which killed 15 people died and wounded about 70. Maute were blamed for that attack and four of its members were arrested and found with video clips of them pledging allegiance. Dela Rosa said intelligence operations would be stepped up and checkpoints would be set up around the capital.

Since the Davao bombing, the Philippines has been under what is termed a "state of lawlessness", allowing the military to support the police, if required by the president. That has led to frequent speculation that martial law could be declared to support President Rodrigo Duterte's deadly drugs war, something his office has repeatedly dismissed.

"For God's sake, the government will not use an incident that will cause panic, fear and undue harm to declare martial law," he said.

In Lanao, a restive southern province, soldiers battled the Maute group to re-take an old town hall building, sending hundreds of residents fleeing. Army spokesman Major Filemon Tan said about a dozen soldiers had been wounded in an air-and-ground assault.