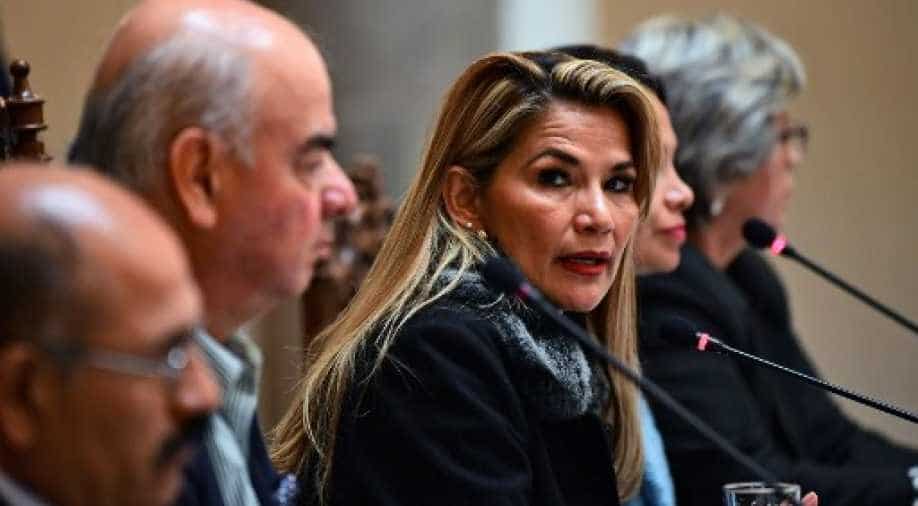 Bolivia's interim President Jeanine Anez asked Congress Wednesday to approve a law that would allow for new elections, after deadly unrest following the resignation of Evo Morales and the disputed October 20 ballot.

The announcement comes after the number of people killed in clashes with security forces at a fuel plant near La Paz on Tuesday rose to eight, officials said, taking the total death toll since last month's vote to 32.

Morales, who fled to Mexico after resigning November 10, accused the Bolivian security forces of engaging in "genocide" against his indigenous supporters and called for action by the international community.

The government earlier released an audio recording of a person it alleged to be Morales ordering a member of the opposition movement to continue road blockades around the landlocked country.

For weeks his supporters have been obstructing main roads leading from agricultural regions to La Paz and other major cities, causing severe food and fuel shortages.

Speaking to reporters, Anez said she hoped the caretaker government's proposal, which also seeks the annulment of the original ballot and the formation of a new election tribunal, would form the basis for generating "a national consensus."

Justice Minister Alvaro Coimbra said the hope was for Congress to approve the law "as soon as possible," to allow the selection within 15 days of a new election tribunal, which would be responsible for choosing a date for the ballot.

A similar proposal put forward by Morales' Movement for Socialism (MAS) party has been sent to a Senate committee for analysis.

Anez still has the option to issue a presidential decree for a new vote.

The Washington-based Organisation of the American States, which audited last month's elections and found irregularities, on Wednesday, approved a resolution calling on Bolivia to "urgently" hold a new vote.

Unrest in Bolivia first erupted after Morales, the country's first indigenous president, was accused of rigging the results of last month's polls to gain re-election.

He resigned and fled to Mexico after losing the support of the security forces.

Anez, the 52-year-old former deputy speaker of the Senate, declared herself the country's interim president last week, filling a vacuum left by Morales' departure and the resignations of several ministers.

Since Morales stepped down, his supporters have demonstrated daily in the streets of La Paz and in some provincial cities to demand Anez's departure.

The United Nations, the European Union and the influential Catholic Church have been trying to broker talks between Anez's interim government and opposition parties loyal to Morales to end the violence.

Interior Minister Arturo Murillo played a telephone recording to journalists on Wednesday, allegedly of Morales issuing instructions to a leader of the opposition movement in Bolivia.

Morales' order was a "crime against humanity," Murillo told reporters, accusing the ex-president of "terrorism."

"In the coming hours we will file an international lawsuit on this," Murillo said.

Speaking to reporters in Mexico on Wednesday, Morales urged the international community to intervene to stop what he called a "genocide" in Bolivia.

"This massacre ... is part of a genocide that is happening in our beloved Bolivia," Morales told a press conference in Mexico City.

The deadliest clashes occurred Friday in the central city of Cochabamba, a stronghold for Morales, where nine people were killed in a confrontation with the army and police.

On Tuesday, deadly violence erupted in El Alto when security forces lifted a siege on a fuel plant that had caused severe shortages in the nearby capital.

The attorney general's office said eight people died in those clashes. The initial death toll had been three, with dozens more wounded.

A spokesman for the ombudsman's office said earlier two of those killed had been hit by gunfire.

The army said in a statement that "agitators and vandals" had attacked and partially destroyed the Senkata fuel plant, "using high-powered explosives."

A convoy of around 50 fuel tankers was able to leave the Senkata plant for the first time in more than a week after police and military forces using armoured vehicles secured the route to neighbouring La Paz.

But the defence ministry issued a statement Wednesday night saying protesters had surrounded the plant again and security forces were protecting it to avoid "any type of attack."

Morales supporters erected barricades around the El Alto plant last week to protest what they said was a coup by Anez.