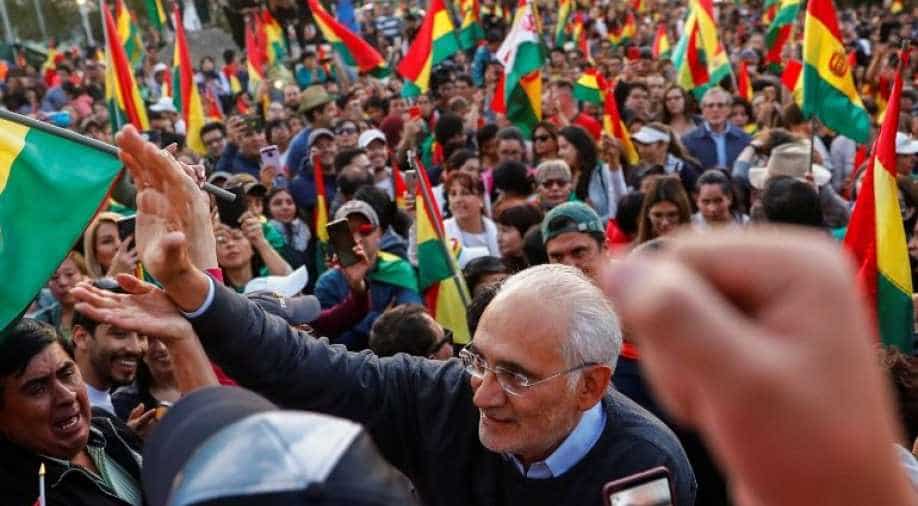 Washington also weighed in with its concerns about last week's poll that gave leftist Morales his fourth term in office.

The Bolivian government said on Sunday it planned to agree on a deal with the Organisation of American States (OAS) within days to audit a controversial national election that handed President Evo Morales an outright win amid allegations of vote-rigging.

Washington also weighed in with its concerns about last week's poll that gave leftist Morales his fourth term in office, while main opposition rival Carlos Mesa called for a general strike in the capital of La Paz on Monday to protest the result.

"The world is watching Bolivia's institutions and leaders to ensure that the voice and will of the Bolivian people are honoured," US Secretary of State Mike Pompeo said in a statement on Sunday.

Bolivian Deputy Trade Minister Benjamin Blanco told state TV on Sunday that a deal with Washington-based OAS on the terms of an audit, including the selection of chief auditors, was being negotiated and should wrap up this week. The OAS said on Saturday that it expected to begin the audit mid-week.

Asked if the government would agree to enact the audit's findings, Blanco said any deal "can't contradict what's established in our constitution and national laws." Morales has said he would call a second-round run-off vote with his closest rival Carlos Mesa if the OAS' audit turned up any evidence of fraud.

Brazil, Bolivia's biggest trade partner, has said it would not recognise Morales' victory until an audit was completed. The OAS has similarly said the result could not be considered legitimate before an audit, given "serious doubts" about fairness and transparency.

Morales has repeatedly denied allegations by the right-leaning opposition that he strong-armed the Supreme Electoral Tribunal (TSE) into giving him just enough votes in Sunday's election to avoid a riskier second-round election with Mesa.

Citing "massive fraud", Mesa called for a strike in La Paz on Monday, which would intensify days of protests that have already seen electoral offices in some regions torched and large marches and strikes in major cities.

"We cannot allow authoritarianism that is increasingly turning into a dictatorship rob the people of its will," Mesa said in a video posted on Twitter on Sunday.

Morales had warned on Saturday that his rural supporters would siege cities that continue to protest his victory, alleging the opposition was stirring up unrest in a bid to unseat him illegally.

Mesa said the government was "trying to quiet the voices of the citizenry," adding "we're not afraid."

The TSE has denied vote tampering since sparking an uproar for abruptly halting publication of results from an electronic quick count of ballots that had aimed to make last Sunday's election more transparent.

With 84 per cent of votes counted, polling showed Morales was likely headed to a run-off with Mesa. But when the TSE resumed reporting of the quick count after a nearly 24-hour pause, Morales had pulled off a razor-thin first-round victory.

The final, legally-binding vote tally gave him 47.08 per cent of votes to Mesa's 35.51 per cent, less than a percentage point over the 10-point lead needed to avoid a run-off and giving him another five-year term.

Protesters say Morales had stocked the TSE and local courts with supporters as he has grown more authoritarian after nearly 14 years in office.

Morales, who denies the charges, ran again this year in defiance of term limits and a national referendum that had oppposed lifting them, after a court ruling found barring him would violate his human rights.