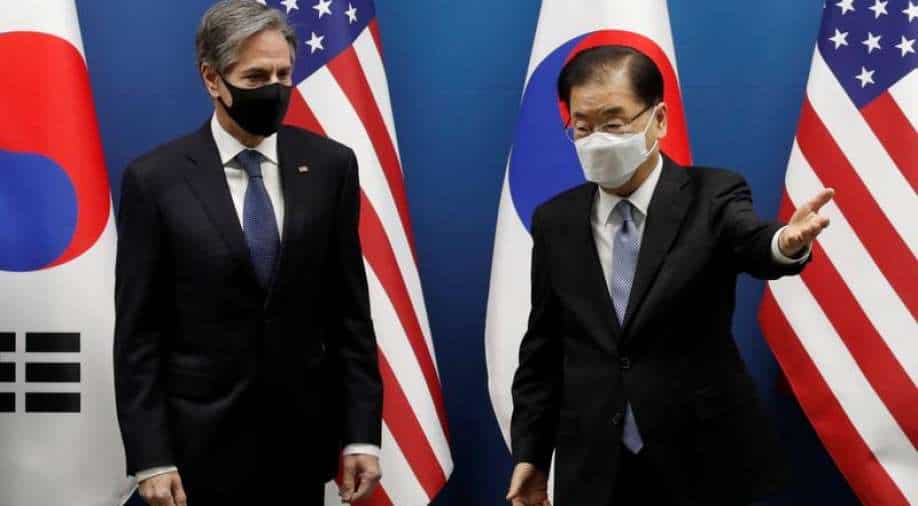 Antony Blinken told a joint briefing with South Korean officials in Seoul that the administration of President Joe Biden would complete its review of North Korea policy in the next few weeks in close consultation with its allies.

US Secretary of State Antony Blinken said on Thursday that both pressure and diplomatic options were on the table for dealing with Pyongyang. The comments came hours after North Korean official Choe Son Hui called the Biden administration's attempts to contact Pyongyang a "cheap trick", in the North's first public statement on the matter.

Blinken told a joint briefing with South Korean officials in Seoul that the administration of President Joe Biden would complete its review of North Korea policy in the next few weeks in close consultation with its allies.

Both pressure and diplomatic options were being considered, he added, but declined to elaborate when asked what approach the United States would take after the review.

"President Biden plans to complete a North Korea policy review in the weeks ahead in close cooperation and consultation with the Republic of Korea, with Japan and with other key partners, including resuming pressure options and the potential for future diplomacy," Blinken said.

He declined to elaborate when asked what approach the United States would take after the review.

But when asked at a separate online roundtable with Korean journalists if Biden would meet Kim, Blinken said Washington is exploring how to convince North Korea to make progress on denuclearisation by considering both "different kinds of pressure points" and diplomacy.

"In a sense, everything is on the table. We have a very open mind about it," he said.

Blinken was making his first visit to Asia as secretary of state, alongside US Secretary of Defence Lloyd Austin.

They issued a joint statement with their South Korean counterparts, Foreign Minister Chung Eui-yong and Defense Minister Suh Wook, vowing to work together on regional issues from climate change and the coronavirus pandemic to trade and North Korea.

"The ministers and secretaries emphasised that North Korean nuclear and ballistic missile issues are a priority for the alliance, and reaffirmed a shared commitment to address and resolve these issues," they said in the statement.

The pair have repeatedly called for the "complete denuclearisation of North Korea" on their trip, which began in Japan.

The briefing also showed potential sources of future policy discord on North Korea and China. Blinken said its North Korea strategy would not only address security concerns but also the "repressive" Pyongyang government's "widespread, systematic abuses" on its people.

"The goals of this policy are clear: we`re committed to the denuclearisation of North Korea, reducing the broader threat the DPRK poses to the United States and our allies, and improving the lives of all Koreans," Blinken said.

South Korean President Moon Jae-in has called for Biden to build on progress made by North Korean leader Kim Jong-un and Trump from their unprecedented summit in Singapore in 2018, which Chung said could provide the groundwork for future talks between Washington and Pyongyang.

"We think the Singapore agreement deserves sufficient consideration as it has basic principles for improving North Korea-U.S. relations, establishing peace and achieving denuclearisation on the Korean peninsula," Chung told the briefing.

Blinken also blamed China at the briefing for undermining regional stability and security with its "aggressive and authoritarian behaviour," and stressed its role in convincing North Korea to denuclearise.

Blinken called for unity among allies, despite Seoul`s hesitance to provoke China, its largest economic partner and an ally of North Korea. "It is more important than ever that we stand together for the values for the interest that unite us," he said.

North Korea had earlier said it would ignore all US efforts to foster contact or dialogue unless Washington changes course, hours before President Joe Biden's top envoys held talks in Seoul.

There could be no contact nor dialogue between Washington and Pyongyang "unless the US rolls back its hostile policy towards the DPRK", Choe said in a statement carried Thursday by the official Korean Central News Agency, referring to the North by its official name.

"Therefore, we will disregard such an attempt of the US in the future, too."

The "new regime" in the US, she added, had only put forward a "lunatic theory of 'threat from north Korea' and groundless rhetoric about 'complete denuclearisation'".

Pyongyang has closed its borders for more than a year to try to protect itself against the coronavirus pandemic that first emerged in neighbouring China.

Blinken's comments in Japan had "seriously rattled us", Choe added.

"We are curious what senseless rhetoric he would make in south Korea to take the world by surprise."

Blinken and Austin are consulting on a review of Washington's policy towards the North being carried out by the new administration.

Trump's unorthodox approach to foreign policy saw him trade insults and threats of war with North Korean leader Kim Jong Un before an extraordinary diplomatic bromance that saw a series of headline-grabbing meetings, beginning in Singapore. But ultimately no progress was made towards Washington's declared aim of denuclearising North Korea, with a second summit in Hanoi in early 2019 breaking up over sanctions relief and what Pyongyang would be willing to give up in return.

The North remains under multiple international sanctions for its banned weapons programmes, which it says it needs to deter a possible US invasion.

Seoul and Washington are security allies and kicked off joint military exercises last week. That prompted the North Korean leader's influential sister Kim Yo Jong to warn the new US administration against "causing a stink at its first step" if it wants to "sleep in peace for coming four years".

Beijing has rebuked Blinken's similar remarks in Tokyo, and his renewed criticism came ahead of his first in-person meetings with Chinese counterparts in Alaska on Thursday.