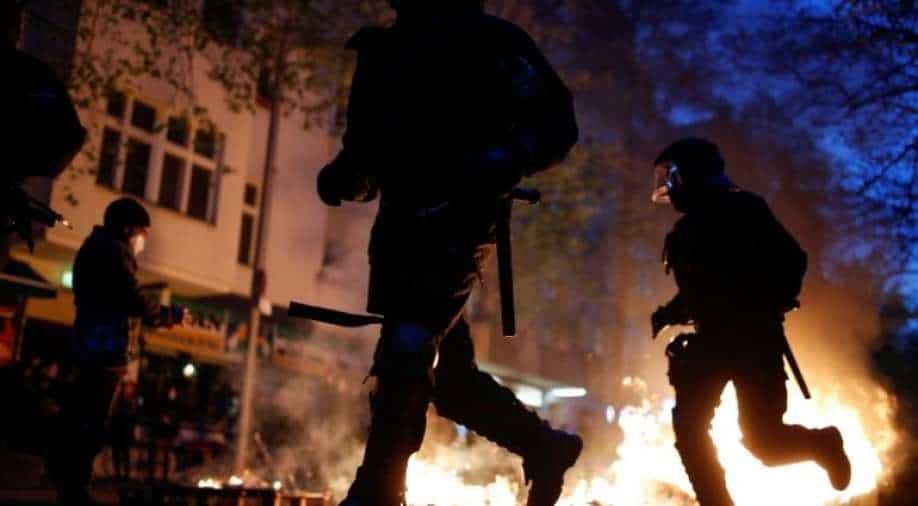 Police officers run past a fire during a left-wing May Day demonstration, as the spread of the coronavirus disease (COVID-19) continues in Berlin, Germany, May 1, 2021 Photograph:( Reuters )

Authorities on Sunday said that over 30,000 people took part in multiple rallies across the German capital on Saturday, a tradition in many European countries on May Day or International Workers’ Day

Berlin witnessed May Day protests on Saturday which left nearly 100 police officers injured. According to the police, over 300 people were arrested after the rallies showed “unacceptable” violence.

Authorities on Sunday said that over 30,000 people took part in multiple rallies across the German capital on Saturday, a tradition in many European countries on May Day or International Workers’ Day.

The police added that most demonstrations remained largely peaceful but violence was witnessed in the evening as “black bloc” protesters were pulled from the crowd for not following COVID-19 guidelines.

The series of rallies were dubbed as “Revolutionary May Day” and saw attendance from different groups against racism, capitalism and the increasing cost of living in Berlin. Eventually, violence ensued with protesters throwing glass bottles and stones at police officers. In addition, many dustbins and wooden pallets were also set ablaze in the streets.

In pics: On International Workers' Day, French rally against reforms in unemployment benefits

According to Berlin’s interior ministry, at least 93 police officers were injured in the clashes and 354 people were detained. "Violence during demonstrations is absolutely unacceptable," AFP quoted Berlin police chief Barbara Slowik as saying.

"The situation did degenerate but was quickly brought under control," she added.

Berlin State Interior Minister Andreas Geisel condemned the “blind destruction rage” and the violence which ensued. Berlin’s Mayor Michael Mueller also commented on the violence, saying “violence, hatred and ignorance have no place in our society, not on May 1 or any other day".

In pics: May 1: History and significance of International Workers' Day

On the other hand, the organisers of the “Revolutionary May Day” in a statement said that multiple protesters were injured in “groundless beatings” at the hands of the police. On Saturday, Berlin had deployed around 5,600 officers to oversee the May Day protests.