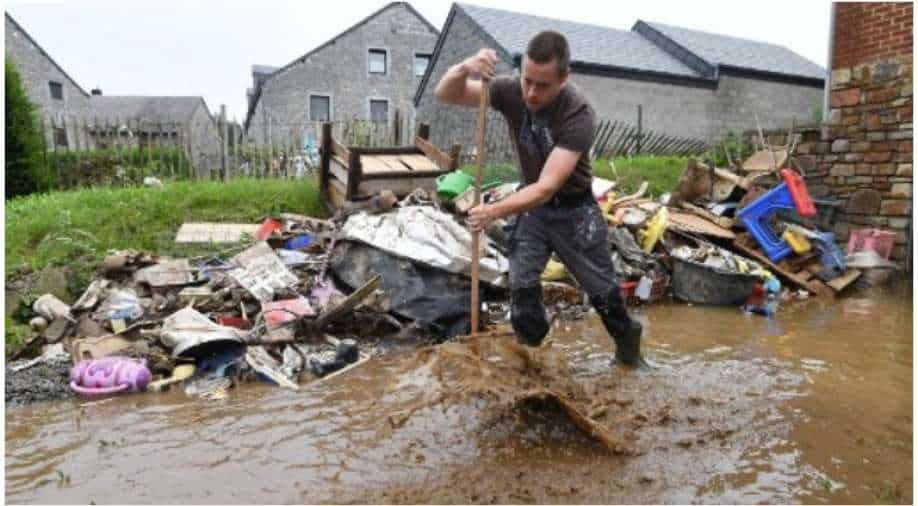 A resident stands in flood waters as he tries to clear up following heavy rains and floods in the town of Rochefort on July 17, 2021. Photograph:( AFP )

Number of Belgian residents who have been confirmed dead has risen to 31. The devastating floods continue to affect several European countries. Authorities said they were calling an end to rescue operations.

"There is no longer an immediate danger in the affected areas," the country's crisis centre said late Sunday, adding that "rescue operations are over but search operations continue in some areas".

"Clean-up and estimating the material damage are now in focus," it added.

Sunday's toll marked an increase of four dead over the number reported Saturday, while the total for missing people rose to 163.

Police in Belgium's south and eastern regions were sent to knock on doors to check for furthur potential victims in the affected areas.

Many remain cut off from communications after losing their phone or for want of electricity to recharge batteries, while others were taken to hospital without identity papers.

Sun and warmer temperatures brightened the picture on Saturday and water levels have been falling to reveal scenes of devastation.

In the hardest-hit town of Pepinster more than 1,000 people had to be evacuated.

More than 37,000 homes were still without power and 3,600 without gas on Sunday, authorities said, while rail operator Infrabel said there was disruption to almost half of train services nationwide.