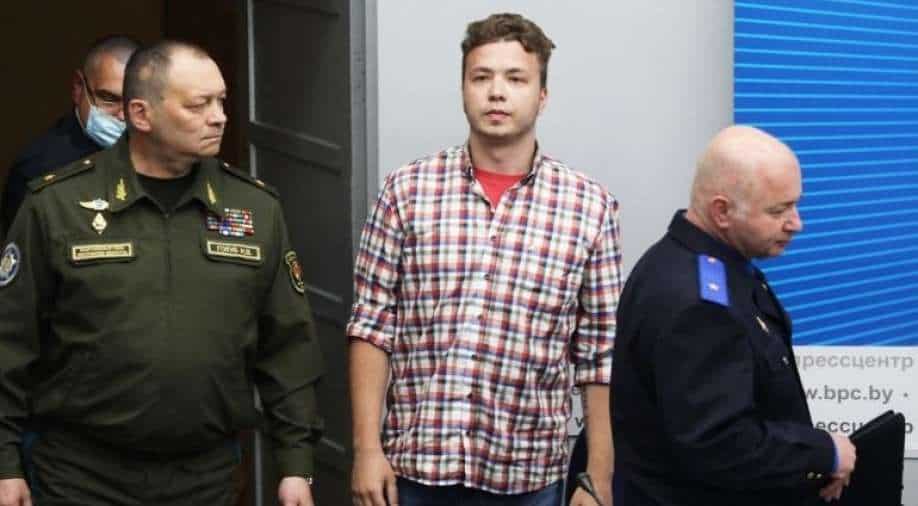 Chief of the Air Force and Air Defense Command of the Armed Forces of Belarus Igor Golub (L), Belarusian activist Roman Protasevich (C) and Chairman of the Investigative Committee of Belarus Dmitry Gora (R) enter the press center before a briefing for journalists and diplomats organized by the Ministry of Foreign Affairs of Belarus in Minsk on June 14, 2021. Photograph:( AFP )

Protasevich's arrest and the forced diversion of the Ryanair plane sparked uproar in the West, feeding calls for tougher sanctions to be put on Lukashenko's government

Belarusian opposition said on Monday that Jailed journalist Roman Protasevich was paraded as 'trophy' in latest public appearance made under duress.

Protasevich sat alongside four officials, two of whom were in uniform, saying he had not been made to cooperate with the authorities and that he was in good health after being arrested last month when his Ryanair flight was forced to land in Minsk.

"Everything is fine with me. Nobody beat me, nobody touched me," he said. "I understand the damage I have caused not only to the state, but also to the country. Now I want to do everything in my power to rectify this situation."

Protasevich has made several appearances since his plane was forced to land in Minsk while on a May 23 flight from Greece to Lithuania via Belarusian air space. He has admitted to plotting to topple President Alexander Lukashenko by organising "riots" and recanted earlier criticism of the veteran leader.

"No matter what he says, let's not forget: he is a hostage. And the regime is using him as a trophy," Franak Viacorka, a senior adviser to exiled Belarusian opposition figure Sviatlana Tsikhanouskaya, wrote on Twitter.

"This is not a press conference but a scene of either Kafka or Orwell."

The Ryanair incident has shown that the international response can be swift, decisive, and effective. We can speak with a unified voice – for the sake of the freedom in Belarus, for the sake of European and global citizens’ safety. For the sake of all of us! pic.twitter.com/QkOH9aQy9K

Belarus of the Brain, the blogging outlet that Protasevich ran before his arrest, said his latest appearance was made under duress and showed the "strongest psychological pressure" being exerted on the 26-year-old.

Previously, authorities said Protasevich is an extremist who has facilitated violence. They have maintained that televised confessions by members of the opposition were made voluntarily.

There was an international uproar when the Athens-to-Warsaw Ryanair flight on which Protasevic and his Russian girlfriend Sofia Sapega were travelling was intercepted by a Belarusian fighter and forced to land in Minsk.

The European Union has imposed sanctions including assets freezes and visa bans and told European operators not to use Belarusian air space.

But two senior officials at Monday's news conference reiterated the official line in Minsk that the flight had to be diverted because they had received a  bomb threat from the Palestinian group Hamas.

Several Western leaders have dismissed this version of events, notably German Chancellor Angela Merkel who described it as "completely implausible".

Belarus has been shaken by unprecedented mass protests since the disputed re-election last year of Alexander Lukashenko, who has ruled since 1994 with the support of Russia.

Lukashenko has responded with a crackdown on protesters, jailing many and forcing many others into exile.