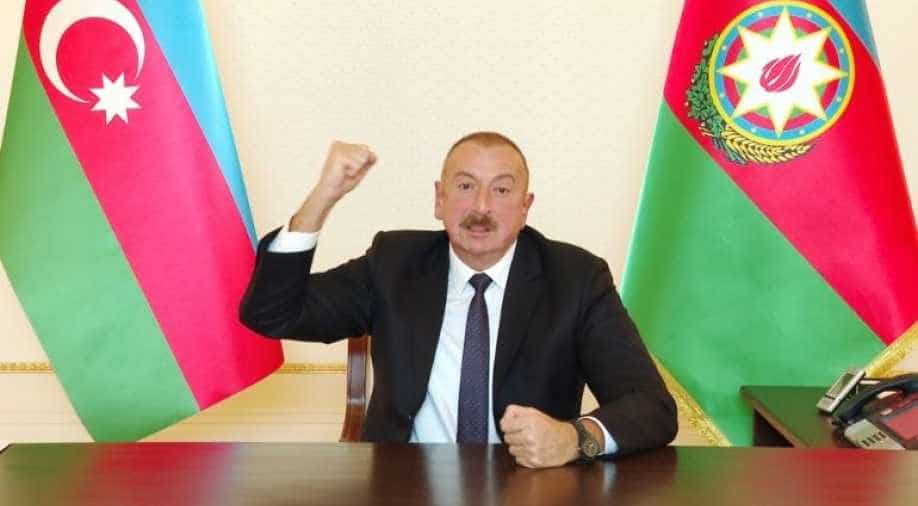 Azerbaijan's President Ilham Aliyev speaks during an address to the nation in Baku, Azerbaijan Photograph:( Reuters )

Several dozen people protested in front of the French embassy in the capital, Baku, on Thursday, chanting ''France, be fair!''

The country's Foreign Ministry said in a statement late Wednesday that the document can only be seen "as a provocation." Azerbaijani presidential aide Hikmet Hajiyev denounced the resolution Thursday as a ''piece of paper adopted to serve narrow political ambitions," and said that France's ''open pro-Armenian position... Has become one of the main factors hindering the peaceful resolution of the conflict."

Azerbaijan's parliament urged the country's government to reach out to the Organization for Security and Cooperation in Europe in order to revoke France's mandate as a co-chair of the Minsk Group set up by the Organization to mediate the Nagorno-Karabakh conflict.

They also urged Baku to revise its "political... and economic relations" with France.

The French upper house on Wednesday adopted a non-binding resolution calling on France to recognise the ethnic Armenian enclave of Azerbaijan as an independent state.

The move came after Armenia agreed to a peace deal earlier this month that ended weeks of fresh fighting over Karabakh, which broke from Baku's control during a war in the early 1990s.

France is a home of a large and influential Armenian diaspora.

Along with Russia and the United States, France co-chairs the Minsk Group, which has led talks seeking a solution to the conflict for decades but has failed to achieve a lasting agreement.

Later on Thursday, the Azerbaijani foreign ministry summoned French ambassador, Zacharie Gross, and handed him a note of protest.

"Azerbaijan categorically rejects the Senate's resolution, which contradicts the United Nations Charter," the ministry said in a statement.

Parliament speaker Sahiba Gafarova said a "dirty political campaign against Azerbaijan" had been organised in the French Senate and that Azerbaijani lawmakers had to respond.

Nagorno-Karabakh lies within Azerbaijan but has been under the control of ethnic Armenian forces backed by Armenia since 1994. That war left Nagorno-Karabakh itself and substantial surrounding territory in Armenian hands.

Heavy fighting that erupted in late September marked the biggest escalation of a long-simmering conflict between the two ex-Soviet nations.

Under the Moscow-brokered peace agreement -- which leaves Karabakh's future political status in limbo -- Armenia is losing control of parts of the enclave's territory as well as seven surrounding districts of Azerbaijan it held since the 1990s.

The Armenian separatists are retaining control over most of Karabakh's territory and some 2,000 Russian peacekeepers have deployed along frontline areas and to protect a land link connecting Karabakh with Armenia.

Nagorno-Karabakh's declaration of independence from Azerbaijan has not been recognised by any country, including Armenia, which strongly backs its separatist authorities.