As civilians flee Mosul, a delicate search for jihadists 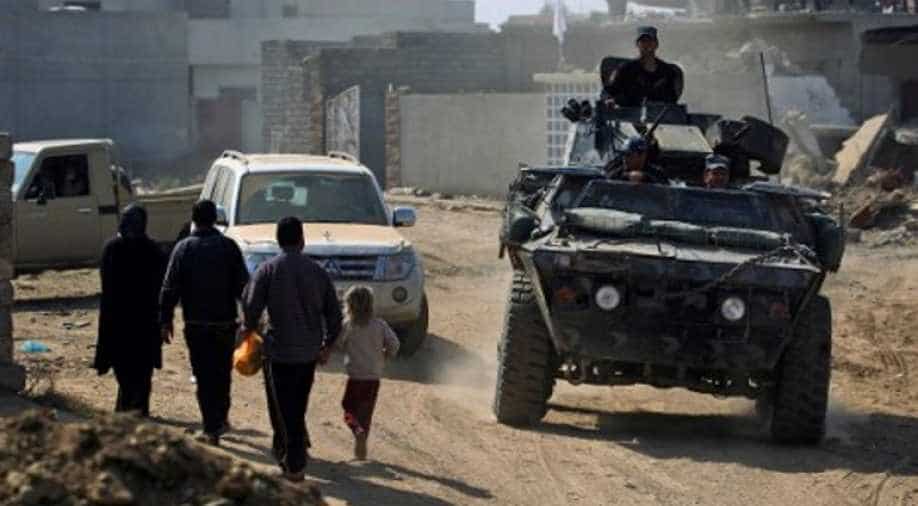 Thousands of civilians, including many women and children, have fled west Mosul since Iraqi forces began the push to retake it on February 19, trekking through the desert during the day and night to escape. Photograph:( AFP )

The Iraqi officer addresses a group of men who fled fighting in Mosul, urging them to admit any affiliation with the Islamic State group, and turn in collaborators.

Second Lieutenant Abdullah Qassem is by turns encouraging and reproachful as he talks to the crowd, who fled as Iraqi forces battle to wrest west Mosul from the jihadist group.

The scene is part of the delicate and sometimes tense process by which Iraqi forces are trying to weed out IS members attempting to escape among civilians.

"They made you grow your beards, they banned cigarettes, they controlled you," says Qassem, dressed in the black uniform of the elite Counter-Terrorism Service and waving a stick to emphasise his point.

"Islam... is about forgiveness, not about killing and fighting. So all of you know what the difference is between Daesh and Islam," he says, using an Arabic acronym for IS.

"Anyone who helped them or let them in their houses, or gave them women to marry is not honourable," Qassem says, his voice just loud enough to carry to the back of the group of around 70 men, sitting in rows in the dust in a village south of Mosul.

The men listen quietly, but the chastisement prompts one to interject: "But we couldn't fight them, we had no power."

Calmly but firmly, Qassem turns to him, his eyes hidden behind sunglasses: "But how did they enter Mosul in the first place? That's the question," he replies, in a tone that does not invite an answer.

Thousands of civilians, including many women and children, have fled west Mosul since Iraqi forces began the push to retake it on February 19, trekking through the desert during the day and night to escape.

As one group arrives in the tiny village of Al-Salam, they are separated, with women and children brought to a shaded area to receive food and water.

The men are investigated nearby. First, they are asked informally for their names and quizzed for information. Afterwards, their identities are run against a database.

Those who are suspected of or admit to IS ties are taken for additional questioning.

The men sit in rows of around ten, most sporting the uniform-length beard mandated by IS.

They are covered in dust, and many look exhausted and nervous.

After Qassem's lecture, the men are ordered to stand and place their hands on the shoulders of the person in front of them.

Then a local notable, an older man in an immaculate white headscarf leaning on a carved, varnished walking stick, scans each row as he confers with an intelligence officer.

The officer, who declined to give his name, orders each row to sit once it has been reviewed.

Then he addresses the group: "If you know someone who pledged allegiance or who worked with Daesh, don't be afraid. Daesh is finished," he says.

He beckons a young man in a tracksuit to stand up and come over.

"Look at this man, he came and he admitted to me that he pledged allegiance, and he was with them for 10 days, and nothing will happen to him," he says, his arms around the shoulders of the young man, whose expression is a mixture of embarrassment and fear.

The officer keeps up his pitch, warning that an admission or discovery of guilt later will not be so kindly received.

And then a man stands up, clutching a sack of belongings, and walks out of the crowd.

"I pledged allegiance, I worked with them in Qayyarah," he says, referring to an area south of Mosul.

"But I swear it was only for 23 days, then I had a break and I left and never went back to them."

Then another joins him, dressed in a hat and a leather jacket.

And a third follows, wearing a tracksuit and avoiding eye contact as he makes his way up to the officer at the front, who smiles.

"You see, nothing will happen, you pledged allegiance, you worked with them for a week, a month, three months, it's nothing. What we need is information," he says.

"We need to finish with Daesh, they are like cancer. If it persists, it will consume the body."