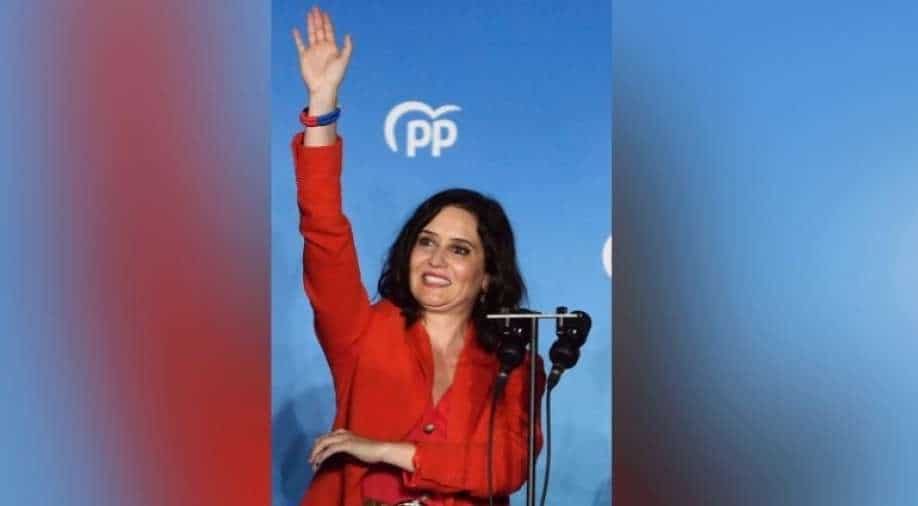 With the left facing with a major defeat, Pablo Iglesias, head of the far-left Podemos, junior partner in Spain's ruling coalition, announced he was stepping down from politics

Madrid residents on Tuesday handed a resounding victory to the region's hardline leader Isabel Diaz Ayuso who has soared in prominence for stubbornly resisting virus restrictions.

With nearly all the votes counted, the results showed a solid win for Ayuso, a rising star in the right-wing Popular Party (PP), who won almost 45 per cent of the votes, handing a stinging defeat to Prime Minister Pedro Sanchez's Socialists.

"Today begins a new chapter in the history of Spain," a teary-eyed Ayuso declared in her victory speech, her words echoing that of PP chief Pablo Casado who declared the result to be "a turning point for national politics".

With 95 per cent of the votes counted, Ayuso more than doubled her party's showing in the 2019 ballot, winning 65 of the regional parliament's 136 seats, while the Socialists shed 13 seats to secure just 24.

Falling shy of an absolute majority of 69 seats, the 42-year-old will be forced to seek support to rule from the far-right Vox which secured 13 seats -- an option she has said "wouldn't be the end of the world".

With the left facing with a major defeat, Pablo Iglesias, head of the far-left Podemos, junior partner in Spain's ruling coalition, announced he was stepping down from politics.

"We have failed, we have been very far from putting together a sufficient majority," he said, just seven weeks after standing down as deputy prime minister to run as his party's candidate in a risky gamble he ultimately lost.

"When you are no longer useful, you need to know when to withdraw," he admitted.

Although the party secured more votes than last time, with just 10 seats it will remain a minor player in the regional parliament while its hard-left rival Mas Madrid secured 24.

At the helm of Spain's richest region for just over 18 months, Ayuso has been one of the leading critics of Sanchez's leftist government and its handling of the pandemic.

An outspoken hardliner, she has won widespread support for resisting government pressure to impose tighter restrictions on the local economy.

Madrid is the only major European capital that has kept bars, restaurants and theatres open since the national lockdown ended in June 2020.

Just over 5.1 million people were eligible to vote in Tuesday's election, which comes after a bitterly-fought and divisive campaign in a region that has been ruled by the PP for 26 years.

From the early hours, there were long queues outside polling stations, with turnout standing at 76 percent, some 11 percentage points higher than 2019.

Although Madrid has suffered Spain's highest numbers of infections and deaths, Ayuso consistently defied calls to shut bars and restaurants, with the hospitality sector regarding her as a heroine.

Her call for a snap election caught the political establishment by surprise but was an astute move aimed at cashing in on the political capital she had clearly accrued.

With "freedom" her campaign slogan, the populist leader focused on people's need for normality, despite the pandemic.

"Having beers is important," she said last month. "After a bad day, a beer cheers you up."

Although critics had said her lax restrictions had ultimately cost lives in a region where almost 15,000 coronavirus patients have died -- one in five of Spain's overall toll of 78,000 -- her business-focused approach paid off at the polls.

"Ayuso deserves to be loved for what she's done in keeping bars open and saving jobs," said 63-year-old civil servant Jose Luis Cordon after casting his ballot for the PP.

Although the left had tried to warn voters about Ayuso's likely tie-up with Vox, their words appeared to fall on deaf ears.

Despite the left taking a drubbing, analysts said it wouldn't have a major impact on Spain's ruling coalition, although it would likely exacerbate the antagonism between the PP and the government.