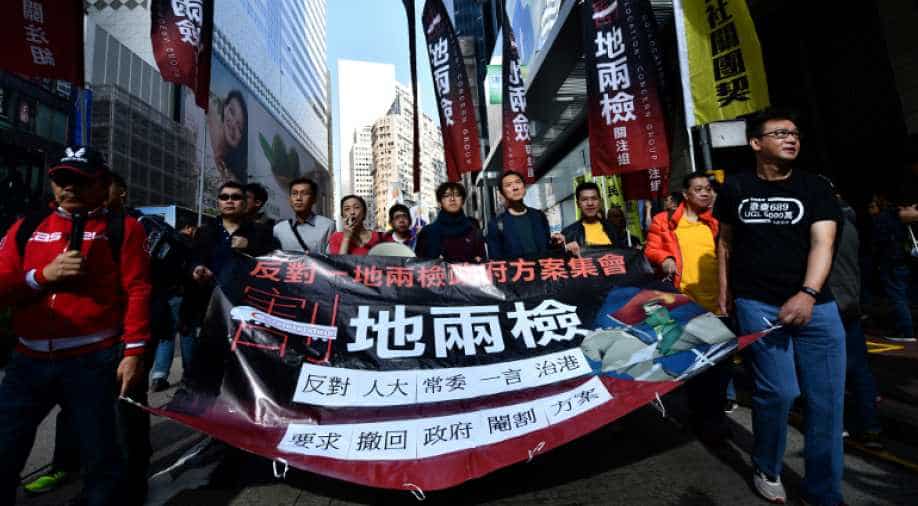 Semi-autonomous Hong Kong has been ruled under a 'one country, two systems' deal since Britain returned it to China in 1997. Photograph:( AFP )

Angry protesters marched through Hong Kong Monday against what they described as suppression by Beijing, days after Chinese authorities ruled that part of a city rail station would come under mainland law.

Semi-autonomous Hong Kong has been ruled under a "one country, two systems" deal since Britain returned it to China in 1997 and enjoys rights unseen on the mainland, including freedom of speech and an independent judiciary.

But a string of recent incidents have fuelled concern over the erosion of its autonomy and rule of law, including the jailing of prominent pro-democracy activists.

Campaigner Joshua Wong, who joined thousands of protesters at the march Monday, said suppression by China's Communist Party government had worsened in 2017.

Wong, 21, was jailed in August over his role in the Umbrella Movement mass pro-democracy protests of 2014 and is on bail pending an appeal against his six-month sentence.

"In 2018, I hope that every Hong Konger can become an avenger, and win back the core values eroded by Beijing," Wong told AFP.

Many of the protesters were angry at the so-called "co-location" agreement, which would bring part of a new rail terminus in the heart of Hong Kong under mainland law.

The high-speed link to the sprawling southern mainland cities of Shenzhen and Guangzhou is due to open this year, with plans for a joint immigration checkpoint that would see mainland police and other officials based in the Hong Kong terminus.

The station is on Hong Kong's famous harbourfront in Kowloon, not on the border with the mainland further to the north.

The final stage before implementation is a vote by Hong Kong's legislative council, which is weighted towards Beijing.

Pro-democracy lawmakers, campaigners and some in the city's legal community say the plan is a violation of Hong Kong's mini-constitution, the Basic Law, which says national laws do not apply to Hong Kong except for a few exceptions.

Hong Kong's pro-Beijing government argues that the rail set-up is for the convenience of passengers and both local and Chinese authorities insist it does not impinge on the city's autonomy.

"I find it ironic that the legally illiterate are explaining what the rule of law is," said office worker Patrick Tang, 48, of Beijing's ruling on the rail link.

Teacher Simon Woo, 47, who joined the march with his wife and daughter said the "survival of Hong Kong is under severe threat", citing the rail terminus agreement as one of the main reasons he was protesting.

"What the Communist Party does and says is irrational. Their attitude towards us is that of an emperor and an autocracy," added Jessica Chan, an education worker in her 30s.

The march was due to culminate outside the city's government offices later Monday.