‘An indelible stain’: How the GOP tried to topple a pillar of democracy 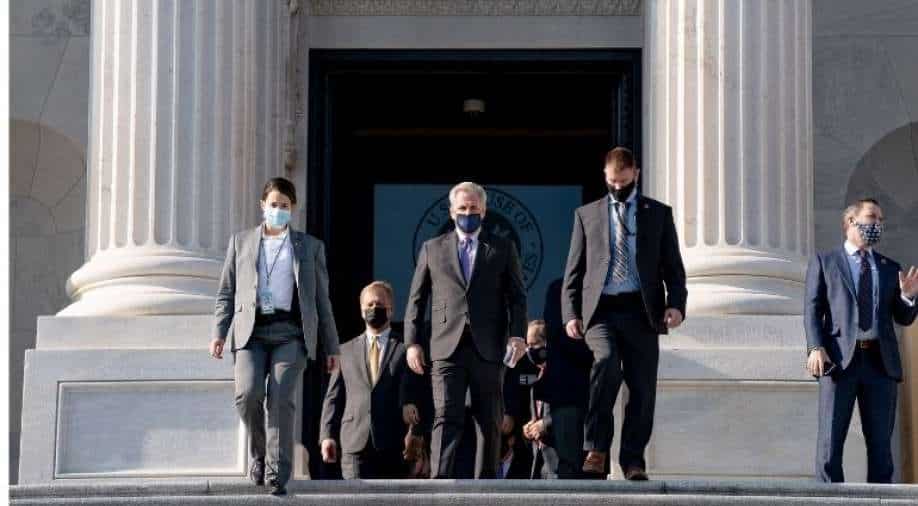 House Minor­ity Leade­r Kevin McCar­thy (R-Calif.), center, walks down the Capitol steps for a news conference on the need to extend the Paycheck Protection Program, in Washington on Dec. 10, 2020. The Supreme Court repudiation of President Trump's desperate bid for a second term was also a blunt rebuke to Republican leaders who had put their interests ahead of the country’s..(Anna Moneymaker © 2020 The New York Times) Photograph:( The New York Times )

The Supreme Court repudiation of President Donald Trump’s desperate bid for a second term not only shredded his effort to overturn the will of voters: It also was a blunt rebuke to Republican leaders in Congress and the states that were willing to damage American democracy by embracing a partisan power grab over a free and fair election.

The court’s decision on Friday night, an inflection point after weeks of legal flailing by Trump and ahead of the Electoral College vote for President-elect Joe Biden on Monday, leaves the president’s party in an extraordinary position. Through their explicit endorsements or complicity of silence, much of the GOP leadership now shares responsibility for the quixotic attempt to ignore the nation’s founding principles and engineer a different verdict from the one voters cast in November.

Many regular Republicans supported this effort, too — a sign that Trump has not just bent the party to his will, but pressed a mainstay of American politics for nearly two centuries into the service of overturning an election outcome and assaulting public faith in the electoral system. The GOP sought to undo the vote by such spurious means that the Supreme Court quickly rejected the argument.

Even some Republican leaders delivered a withering assessment of the 126 GOP House members and 18 attorneys general who chose to side with Trump over the democratic process, by backing a lawsuit that asked the Supreme Court to throw out some 20 million votes in four key states that cemented the president’s loss.

“The act itself by the 126 members of the United States House of Representatives, is an affront to the country,” said Michael Steele, the former chairman of the Republican National Committee. “It’s an offense to the Constitution and it leaves an indelible stain that will be hard for these 126 members to wipe off their political skin for a long time to come.”

Speaking on CNN on Friday, Gov. Chris Sununu of New Hampshire, a Republican, said, “What happened with the Supreme Court, that’s kind of it, where they’ve kind of exhausted all the legal challenges; we’ve got to move on.” It was time, he said, for Congress to “actually do something for the American people, surrounding the vaccines, surrounding COVID.”

With direct buy-in from senior officials like Sen. Lindsey Graham, R-S.C., and House Minority Leader Kevin McCarthy, R-Calif., the president’s effort required the party to promote false theory upon unsubstantiated claim upon outright lie about unproved, widespread fraud — in an election that Republican and Democratic election officials agreed was notably smooth given the challenges of the pandemic.

And it meant that Republican leaders now stand for a new notion: that the final decisions of voters can be challenged without a basis in fact if the results are not to the liking of the losing side, running counter to decades of work by the United States to convince developing nations that peaceful transfers of power are key to any freely elected government’s credibility.

“From a global perspective this certainly looks like many of the cases we’ve seen around the world where an incumbent tries to hold onto power," said Michael Abramowitz, president of Freedom House, a Washington-based group that promotes democracy abroad with support from both parties.

Following the court decision, one of the 126 House Republicans who backed the lawsuit, Rep. Bruce Westerman of Arkansas, said that the court’s decision meant the end of Trump’s efforts and “closed the books on challenges to the 2020 election results.”

Democrats took heart in the court’s decision in the case filed by the Republican attorney general of Texas, one of several dozen that judges have soundly rejected on legal or factual bases, even if more lawsuits are certain to come ahead of Biden’s inauguration on Jan. 20.

But civil rights attorneys saw the potential for long-lasting damage outside of the legal realm where the Republican efforts — and the lie that Biden’s win was the result of widespread fraud — have so definitively failed.

Republican state legislators across the country are already contemplating new laws to make voting harder, as they continue to falsely portray the expansion and ease of mail-in voting during the pandemic as nefarious. Many of them view this year’s expanded voting ranks as bad for their party, despite Republican successes further down the ballot. Their consideration of new voting restrictions amounts to an ongoing attack on the integrity of the voting system, involving still more false and debunked claims.

“There is an anti-democratic virus that has spread in mainstream Republicanism, among mainstream Republican elected officials,” said Dale Ho, director of the Voting Rights Project at the ACLU. “And that loss of faith in the machinery of democracy is a much bigger problem than any individual lawsuit.”

Indeed, after the Supreme Court’s ruling, the Texas Republican Party effectively called for secession by red states whose attorneys general joined in the Texas suit.

“Perhaps law-abiding states should bond together and form a Union of states that will abide by the Constitution,” a statement from its chairman, Allen West, read. It followed an observation Rush Limbaugh made earlier in the week, when he said, “I actually think that we’re trending toward secession.”

The talk of secession came during a week in which election officials across the country, from both political parties, said they had become the subjects of menacing threats of violence, including to family members, for standing by Biden’s victory.

A website of unknown provenance that caught the attention of law enforcement appeared to promote a hit list of mostly Republican officials who had resisted Trump’s demands to overturn an election he lost, listing their personal information and imposing red cross hairs over their pictures.

Trump made it clear that the Supreme Court decision would not slow a post-campaign campaign, the futility of which has dampened neither its ferocity nor its pertinacity. On Twitter, Trump on Saturday called it a “disgraceful miscarriage of justice” and wrote “WE HAVE JUST BEGUN TO FIGHT!!!”

Hours before the court made its decision public the Trump campaign released two ads repeating debunked allegations, indicating it would continue to pressure elected Republican officials to somehow reverse Trump’s political fate. “Demand an honest election and an honest count, contact your legislators today,” one ad exhorted. (The campaign claimed that the ads would begin airing on cable television on Saturday morning, but at least one ad tracking firm said they had not seen any reservations made as of Friday night.)