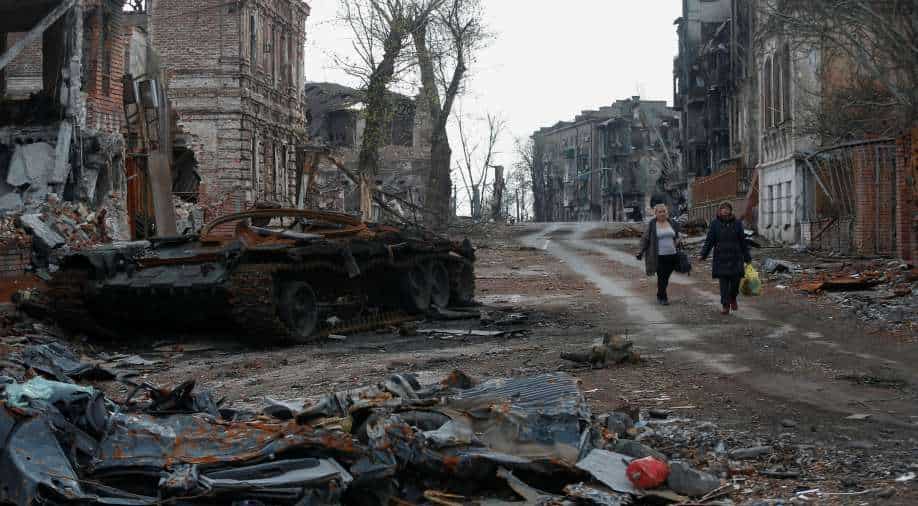 Ukraine has been consistently demanding heavier weapons to take on Putin's forces as Russia continues its push in Mariupol, located in the Black Sea region.

Amid the war with Russia, Ukraine President Volodymyr Zelensky met US secretary of state Antony Blinken and US defence secretary Lloyd Austin in Kyiv as the government repeated its plea for offensive weapons to take on the Russian forces.

Ukraine has been consistently demanding heavier weapons to take on Putin's forces as Russia continues its push in Mariupol located in the Black Sea region.

The Zelensky government invited Russia for talks near the Azovstal plant in Mariupol. Reports say Ukrainian fighters and civilians are stuck in the city even as Russia continues to bombard the city.

Mariupol residents have been low on electricity, food and water for weeks amid the fierce fighting.

President Zelensky's aid confirmed the proposed talks saying that it could be held "right next to the walls of Azovstal" even as Zelensky's advisor Mikhaylo Podolyak said: "Russia is continuously attacking the Mariupol Azovstal."

Meanwhile, the UN refugee agency said over 5 million Ukrainians have fled the country since President Putin announced the "special military operation" against Ukraine on February 24. The majority of those who have fled are women and children.

Most refugees have poured into neighbouring Poland numbering over 2.8 million including to Romania, Hungary, Moldova and Slovakia. According to the UN, over 500,000 people have also sought refuge in Russia with over 1,00000 crossing over to Russia from the separatist pro-Russian regions of Donetsk and Lugansk.

The UN had called for a stop in fighting to allow the evacuation of Mariupol residents, however, Ukrainian officials said over the weekend that evacuation attempts were "thwarted" by Russian forces.