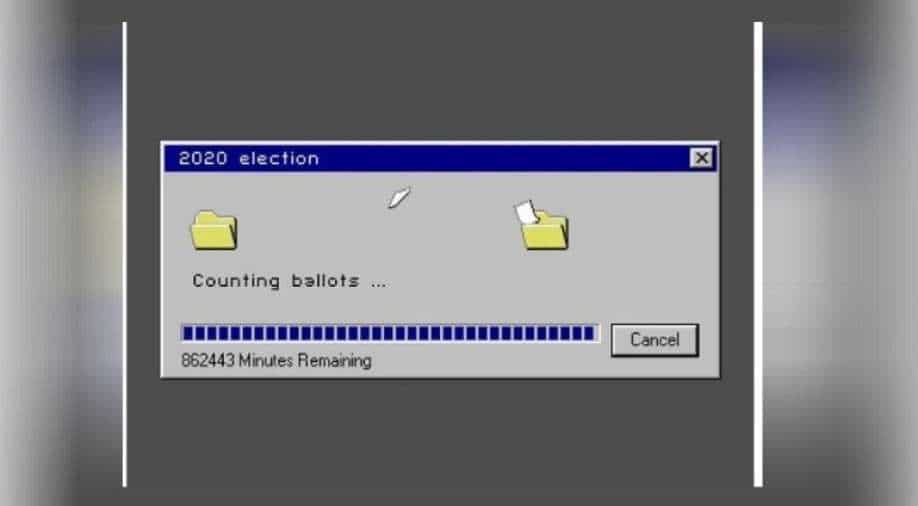 The situation of the election in the United States continues to remain tense and the world is waiting eagerly to see the next president of the United States. Over the last several months, the world's largest economy has seen it all: from becoming the world's worst-hit coronavirus country, widespread protests, riots and violence related to racism and President Donald Trump's erratic presidency and unverified claims.

The record voting through postal ballots meant that the declaration of results will take a considerable amount of time and that is why even after nearly three days, we don't know who the next president would be.

However, social media has kept Americans busy as the medium is helping them crack some jokes and lessen the intensity of a tightly-fought election.

In a reference to the worn-out method of files getting downloaded in times when internet speed used to be slow in the era of internet explorer, an Instagram account by the name of Oatmeal shared an image of votes getting counted and time remaining is several minutes.

Nevada AG Aaron Ford responds to people sharing a meme joking that the Zootopia sloth is who is counting ballots in Nevada: "my friend @Bakari_Sellers tweeted about it and I told him he aint right about that."

Adds "we're doing to the best we can," "it's going to take some time" pic.twitter.com/scbtNSDk3t

Many users also trolled Nevada, which is one of the key states that has not completed its counting, with one person sharing a video making fun of election officials and the background music running: "I don't really want to work today".

me driving to nevada to count those votes myself #Elections2020 pic.twitter.com/u6h5CBEMUt

The counting remains on the states of Nevada, Georgia, Pennsylvania, North Carolina, and Alaska and since none of the contenders has an outright lead, these states will decide the next American president.